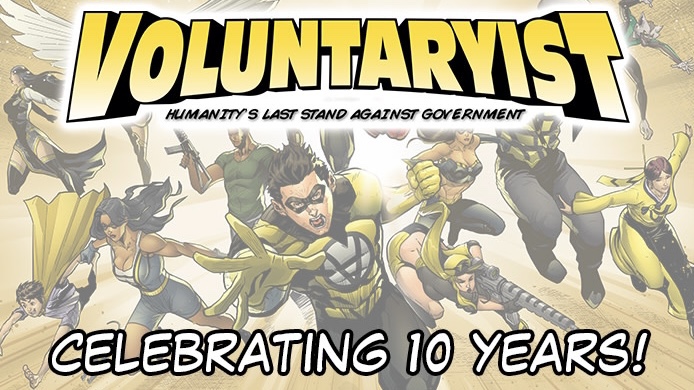 Voluntaryist is celebrating its 10th anniversary on Indiegogo and wrapping up the final issue in the Origins arc.

Voluntaryist is the tale of a superhuman hero who finds himself pitted against the government as the government tries to enslave humanity once and for all. He is a young man with extraordinary powers created through a chance encounter with cosmic radiation. His personal mission is to rescue his parents from government agents, but that objective is often frustrated with the likes of giant monsters, super-villains, and even the armed forces.

The comic takes a contemporary look at the question, “What does it mean to be truly free?“

Origins VI continues the series in detailing how the protagonist, Jack Lloyd, and his new-found friend, Mack Lee, attempt to rescue Jack’s parents from government agents. Jack and Mack sneak their way into a clandestine state lab as they inch closer to solving the mystery of where Jack’s parents were taken to. What will Jack and Mack uncover in their quest to find out the truth? Find out for yourself in Voluntaryist Origins VI!

You can also learn more about the series at https://volcomic.com

REVIEW: Classified Jaeger
THE DARK SIDE OF PURITY LAUNCHES ON KICKSTARTER!
Sponsor