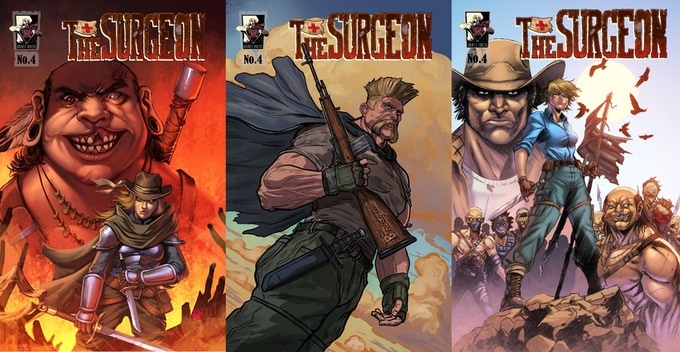 HAMILTON, MT — Fans of the blood-and-dust post-apocalyptic Western comic The Surgeon are about to be rewarded with a fourth chapter in the series, now powering up as a “Project We Love” on Kickstarter. Simply titled “Heroic,” Chapter 4 picks up at the end of a long and deadly battle for the frontier fort of Turtle Island.

“Chapter 3 left the story in an uneasy cliffhanger at the end of that long battle,” creator and author John Pence (Up from the Skies; Hot Brass, Pharaoh’s Gold) says, “And I apologize to the readers for that. Unfortunately, things are just going to get more tense for a while, so don’t expect a relaxing read anytime soon.”

“Back when we started The Surgeon, John came to us with a script that was built more like a graphic novel than a short series, and he was pretty … uh, let’s say ‘intense’ about making us agree to finish this first arc of about 150 pages,” says publisher and editor Laurie Foster. “Chapter 1 was great, and if it was all we ever published, it’s not a bad legacy. But knowing how this story moves forward to its conclusion, it’s really exciting now to see that we’ve made it this far and are on the downhill slope.”

Chapter 1: Turtle Island first swaggered onto Kickstarter and then into comics shops in late 2017 with a unique voice in the genre that earned a dedicated and enthusiastic readership from the jump. The titular Dr. Jenny Hanover’s skill with both the scalpel and the sword set the stage for great comics action and complex characters doing their best to survive in a broken world.

With two more installments to go after Chapter 4, the UHS team is eager to finish 5 and 6 with the momentum that a bigger fan base and more experience provide. Chapter 4: Heroic boasts line art by Omar Zaldivar. “Omar’s work is a good match for this story,” says Pence, “It’s got weight and action, but there’s an intimacy that works for the scale of this chapter.”

Running until May 12, the Surgeon Chapter 4: Heroic Kickstarter features a predictably badass set of backer premiums for all budgets, including chances to catch up on the first three issues.