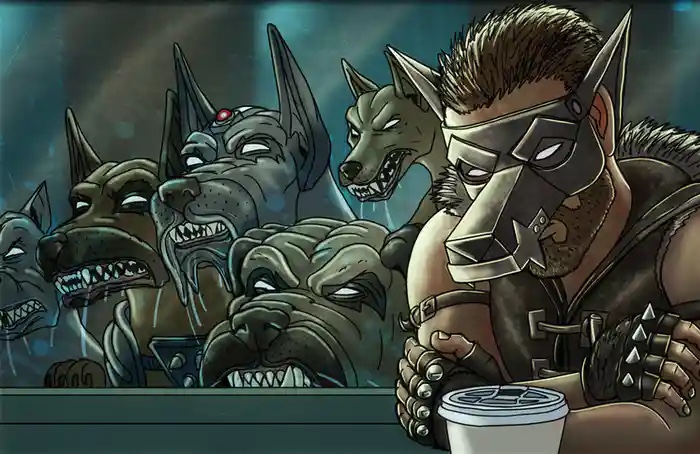 This article is a guest article from Lynsey G., Co-Founder of Oneshi Press.

We always thought PACK—our comic series about vigilante dogs fighting for justice on the streets of Brooklyn—would be Oneshi Press’s “easy sell.” Adorable rescue dogs taking down violent criminals alongside a guy in a dog mask—what’s not to love? A simple morality tale. A classic comic book story.

But as we were forming the skeleton of the story in the early to mid-2010s, we were also watching the neighborhood around us—our part of the world—change. We’d moved to Bushwick, Brooklyn, because that was where we could afford to live at that time. The block we’d moved into was full of old brownstones in varying states of repair. The one next door was condemned a few months after we arrived, and our neighbors were facing eviction. Our landlord told us they were squatters because they hadn’t been paying rent while the building disintegrated around them. She wanted them gone so that the building—like hers—could be renovated and the rent inflated. She wanted the block declared historic, but in order to “preserve” the neighborhood, the people who’d grown up there were forced out while we watched.

Soon, we had to go, too. Rent was getting higher, and we did not like our landlord. We moved a mile north, into a much-less-fancy building. Like our last, this neighborhood was no stranger to violent crime. When the police showed up—which was rare—they often exacerbated the problem.

Within a year, that neighborhood shifted, too. The bodega down the street renovated and started selling small-batch kombucha; the laundromat near the subway turned into a microbrew-serving bistro. The building next door, which was empty when we arrived, was gutted, renovated, and rented for several times its former rate.

Instead of staying in town to watch it all happen again when our rent inevitably skyrocketed, we moved out of the city and set up Oneshi Press thousands of miles away. It’s been nearly six years, and now the cycle is starting here, too. Wealthier people from out of state are moving into the area, and tenants we’ve known for half a decade are being forced out by rising rent to make way for replacements with bigger rent checks in hand.

In all of this, we’ve been lucky. Our numerous forms of privilege—we’re white, and we pass for middle class—have let us skim along the top of this repeating cycle. Rental management companies and landlords find us non-threatening, and though we don’t make much money, we know people who can sign as guarantors on leases. And we can get along with the police when they come around.

But we can see what’s happening. It’s a cycle that’s been repeating for longer than we’ve been living it, longer than we’ve been around. We know the pattern of gentrification is bigger than us. But we also know that it doesn’t happen all by itself. And we recognize that the groups of people who are most affected by it—people with low incomes, people of marginalized identities and from marginalized communities, particularly people of color—have been railing against it for just as long as it’s been happening. Strong communities don’t just break down and move out on their own to make way for strangers.

PACK was born of watching this pattern play out again and again and wanting to see it change, but feeling powerless. But we’re storytellers. A comic book series exploring gentrification, systemic racism, and the ways that policing intersects with both of these topics might not change the cycle. But since stories are how we contribute to the conversation, we needed to get to work.

We wondered, what if one of the people affected by this cycle stood up against the petty crime he saw on the streets? What if a violent criminal whose mind had broken along with his life rebranded himself as a hero? Developed friendship with animals who suffered at the hands of the same system that hurt him? Would they be heroes or villains? And what new angle might we be able to view the cycle from, if we added these characters to the equation?

Back in the mid-2010s, when we were planning the series, we knew we had to deal carefully with topics that were very scary at that time. For instance, one of our main characters had to be a kindhearted rookie cop who wants to be a good guy. But for the story to ring true, that character would have to learn that not all cops are good guys.

So, we approached the police and police-adjacent people we knew. They loved the idea of “good guys and dogs.” But then we brought up the idea that some of the cops in this comic might not be the good guys—and our sources went cold. The very whisper of the concept of less-than-great cops—comic book characters, even—shut them down. People we’d grown up with ghosted us, unfriended and unfollowed us.

We knew we were in scary territory. But we also knew that their reactions meant we were onto something important.

So, we took it slow, kept it subtle. In the first two issues of the series, we carefully worked our way closer to the heart of these issues, hoping to build up steam before digging into the real issues behind PACK.

And then, George Floyd. Breonna Taylor. Elijah McClain. Ahmaud Arbery. Emmett Till. Eric Garner. Michael Brown. Philando Castile. Tony McDade… The list goes on and on. The protests of summer 2020 were necessary, important, and long overdue. We were in awe of the power of the people as they took to the streets and demanded justice—along with acknowledgment of how the systems of power were targeting Black and brown people and communities through injustices like gentrification and brutality in policing.

Suddenly, the conversation rocketed forward, from an inability to express discomfort about policing—to “ACAB.” And our comic, suddenly looked passé, implying as it did that some cops might want to be heroes.

We had to stop. Not just to take in the gravity of the moment, to behold the power of the BIPOC community, and to lend our support. But also to consider whether our story might be complicit in a corrupt and violent system. To take a hard look at the discomfort that held us back from saying what we needed to say. To examine whether that same discomfort might be holding us back from being true allies to our friends and neighbors.

Was the story we’d planned just a story? Just an easy sell? Or was it doing the work, engaging with conversations about race and politics and policing? Was PACK aligning with our values? Were our values strong enough to hold up in the face of the justice being demanded by the protests?

Even if they were, was it right for us to tell this story? Would our participation in this conversation dilute it, or overshadow the voices of those who had been far more marginalized? People of color should be leading this conversation, and creators of color who take on these issues should be supported in doing so. Would publishing PACK from our position of privilege be doing harm?

We sat with these questions for a year. We’d been planning to publish PACK 3: Temperance in the winter of 2020, but we pushed it back, again and again.

The conclusion we came to was that the more of us who are a part of this conversation, the better. These issues have proven that they won’t go away after a summer of protests, no matter how massive. And the systems of power are too deeply entrenched to be dismantled by our comic book. But more people engaging deeply with these problems can only lead to more transparency, and hopefully, eventually a path to justice.

So we talked to each other, to the people of color in our lives who had experienced these issues in different ways than we knew we ever would. We pinned our values deliberately to our sleeves, and then we dove back in. We edited the script, changed the art, wrote new material. Instead of tiptoeing around them, we looked at the difficult issues head on. We leaned into what we feared. Then, we ran it all through a phalanx of sensitivity readers, fans, friends, and family. And then we edited it all again.

Now, it’s time for PACK to come out of its shell. The series isn’t an easy sell—not by a mile—but it aligns with our values more than ever. We know we don’t have the answers to the problems we see, but we hope that by bringing those problems into the open just a bit further, shining just a smidgen more light on them, engaging more readers with them…the answers to those problems might move a tiny bit closer than they were before.

Support The Pack 1-3 Kickstarter
Liked it? Take a second to support ICD on Patreon!