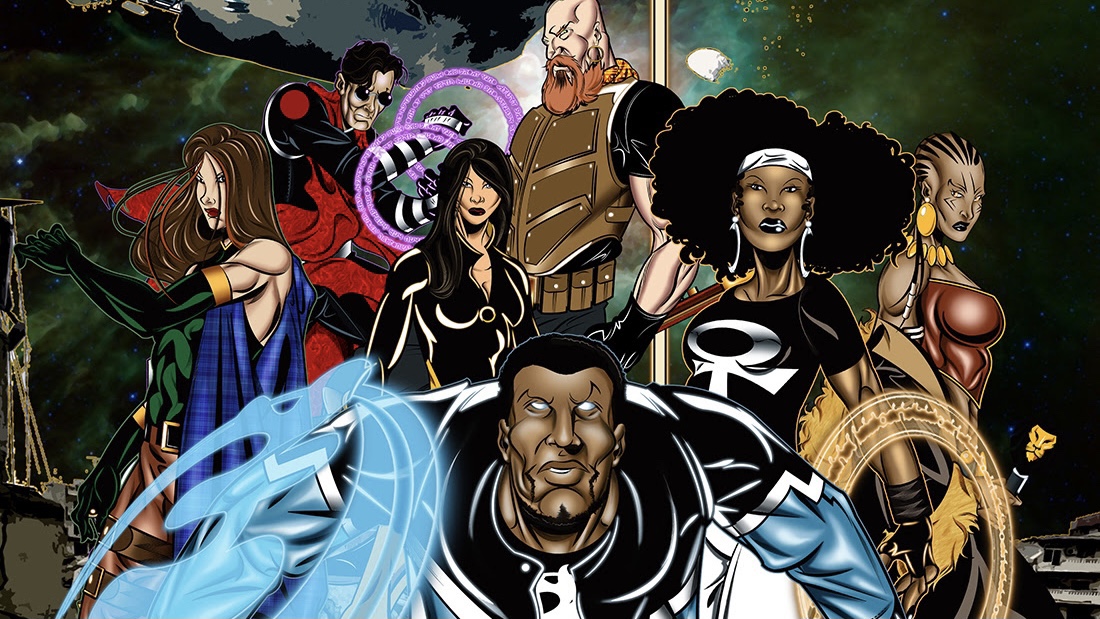 “The gods have chosen them to protect humanity from itself…whether humanity wants them to or not. They combat those who control the fate of the planet. Through their actions, the world would never be the same.”

Created by Jiba Molei Anderson, The Horsemen is the saga of seven ordinary people thrust into extraordinary circumstances, as the gods of ancient Africa possess them.

With the release of the Divine Intervention first issue in 2002, The Horsemen became a pioneer of the Afrofuturism movement in comics by using the Orishas as the basis for the superhero mythology.

“I wanted to work with a different faith system, a system that when The Horsemen was created, no one, I mean no one, was thinking of. No one was thinking of using the Orishas as a launch point for a comic book world at that time.” – Jiba Molei Anderson

The Horsemen would go on to become a critical success and has generated a cult following. Its fan base would include Hollywood talents such as Tony Todd (Candyman, Star Trek DS9) and Sean Astin (Lord of the Rings, Stranger Things) and comic book royalty like the late Dwayne McDuffie(Justice League Unlimited, Milestone Media).

Also, The Horsemen has made an educational and historical impact being included in a long-running exhibition at the Smithsonian National Museum of African Art as a small example.

The next installment of The New Mythology, The Horsemen: Manifest Destiny is a 64-page journey of three tales that continues to chronicle the past, present, and future of the Horsemen Universe.

Written by Kofi Malik Boone, Ogun: Season of Ice tells an early tale of the Master of Iron as he defends a newly – freed people from the wrath of the sinister Mbwari!

Witness the psychic death of a nation’s mythic identity as The One Day Wartells the story of what happens to those who choose violence against The Horsemen!

In Birth Of A Nation, a new race rises from the ashes of an apocalypse. They are not Orisha nor are they Deitis. They are the Manifest and they are all that stand between Creation and the forces of Ragnarök!

Géroux Noél-maxence Aurèle. Kenjji Jumanne-Marshall. Sean Damien Hill. These are the three premiere artists in the Black Comix community, along with series creator Jiba Molei Anderson, who will be providing exclusive variant covers for this Kickstarter. Check out these covers, including the variant covers from the good Misters Hill and Anderson to show you how we do things!

Check out some of the good will the book has generated over the years:

“The characters of Shango, Eshu, Ogun, Oya, Oshun, Yemaya and Obatala are beautifully drawn and characterized according to their personas in the Ifa pantheon. The scenes featuring enforcers of divine will is exciting and action filled, with little dialogue on their part which adds a welcome bit of mystery to them.”

“The Horsemen series is a slow burn. It’s something to be enjoyed over time as a true epic should.”

“Anderson’s tale however is no superhero story created with the goal to ‘merely’ entertain his readers but to challenge them to a battle. If one engages in Anderson’s battle and in turn recognizes The Horsemen’s Hip-Hop aesthetics, the ‘mere’ superhero comic unfolds a variety of layers of meaning.”

With Manifest Destiny, our goal to take The Horsemen to the next level from cult classic to wide audience hit. So click on the button below and come along for the ride when the Kickstarter campaign for The Horsemen: Manifest Destiny, written and illustrated by Jiba Molei Anderson (with Kofi Malik Boone), and become a part of The New Mythology on August 17, which happens to be Jiba Anderson AKA The Mean Ol’ Lion’s birthday!

The Horsemen: Manifest Destiny Kickstarter
Liked it? Take a second to support ICD on Patreon!