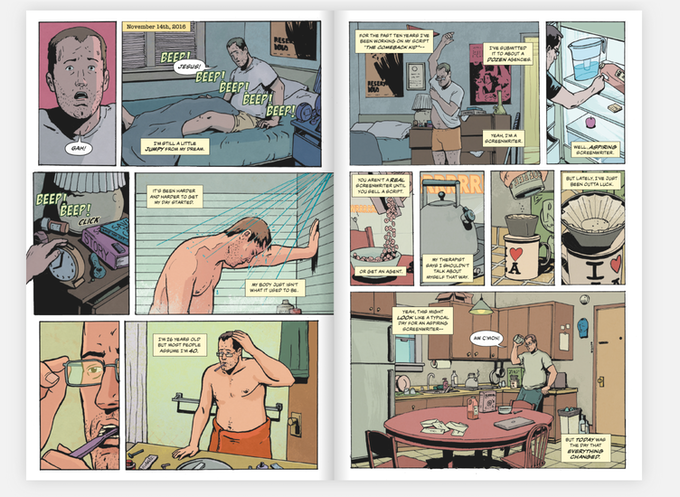 An aspiring screenwriter with an uncanny resemblance to BEN AFFLECK discovers there may be a more sinister explanation behind his striking likeness.

Ari is your average 26 year old aspiring screenwriter.  He wakes up, drinks his coffee, and starts pounding away at his script. However, things aren’t quite going as planned for Ari.   For one thing, he seems to look and feel way too old for his age.

But whats even worse is that people seem to think he’s someone he is not.  They constantly mistake him for one of the film industry’s top talent, hollywood hearthrob Ben Affleck.

Ari doesn’t let this deter him. He believes in his script and is determined to become a successful screenwriter. ….however this was the day that everything changed…

Dylon Peven (creator/script) – is an independent filmmaker and screenwriter, his short films have been screened at BFI and Horror Film Fest. This is his first comic.

Zander Bice (creator/art, letters) – is an award winning illustrator and artist, he has exhibited in shows in Los Angeles, San Francisco and Seattle. Comics are a lifelong passion of his. This is his first full length comic.

Nicholas Michael (colors) – is an illustrator turned colorist with recent work published by Source Point Press and Thrilling Nostalgia. He lives in Portland, OR and has been told he owns a problematic amount of sweaters. (Currently 48)

Adrian Contreras (cover art) – is an illustrator and designer based out of Los Angeles. He currently works in the skateboarding industry, and takes any chance he can get to paint with his airbrush, hang with his cats and skate.