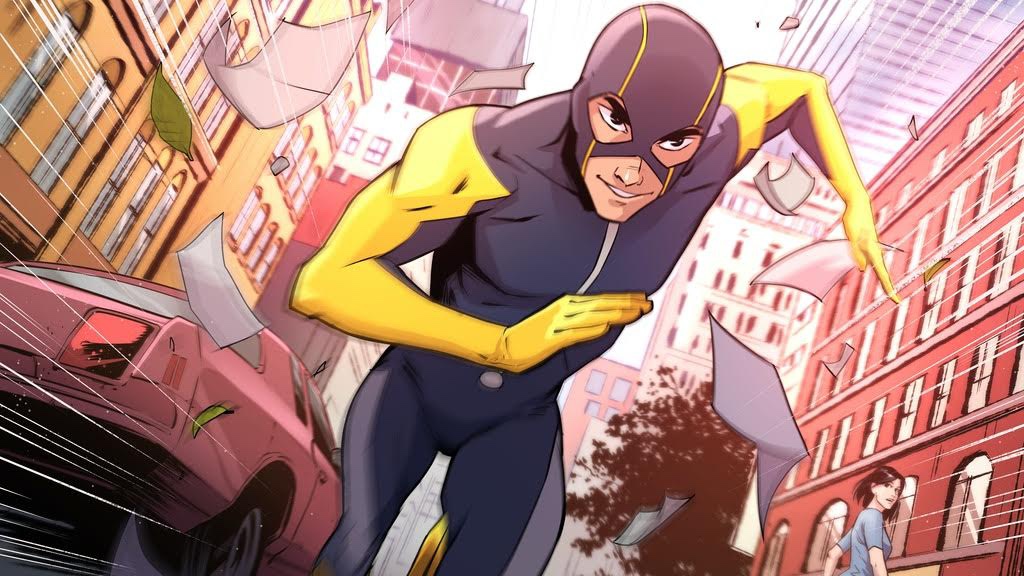 Bullet #1 hits right on target in paying tribute to the almighty Silver Age of Comics whilst still acknowledging the sensibilities of modern day life in the how and why a superhero would react to a neverending cascade of dramatic scenarios that comes the way of a super speedster. This is a silver age inspired romance. Superhero fans will laugh, they will cry, they will applaud this new found epic of heroism told from Indie Comic Book label ‘Altruist Comics.’

Co-writer/co-creator Jordan Alsaqa has this to say about when coming up the idea of Bullet:
“As someone who loves characters like the Flash and Sonic the Hedgehog, it’s been a lot of fun working with Randy, Kath, and Lucas to bring a speedster in the classic superhero style to life. When Randy first contacted me, I was immediately interested in emulating Silver Age hijinks and heroics, and the overall arc of this one-shot promised a more intriguing story than just a simple throwback tale. I think the finished comic provides all the humor, action, and heart you could want from an indie superhero title. And while we hope to explore this universe further, it’s wonderful having a self-contained, complete adventure to offer new readers. “

Altruist founder Randy Stone echoes Jordan’s excitement:
“For a story about a super speedster, Bullet can’t come fast enough. The Kickstarter will be launching soon and I’m so excited to finally hold this book in my hands! I know that readers are going to love it as much as I do.

“I had so much fun developing the story with Jordan Alsaqa. Dale, Jo, and the rest of the cast had lived in my head for so long, it was great to see them finally come to life, especially with the personalities that Kath Lobo drew them with. I’d be shocked if anyone doesn’t fall in love with our leads! It was also a pleasure having Lucas Gattoni on board for another project and I look forward to our next collaboration.“

BULLET #1 drops on Kickstarter on the 16th August and will run for 30 days. Click here to support.

Jordan Alsaqa is a Palestinian-American comic writer. Jordan graduated from N.C. State University with a degree in Creative Writing, and his first one-shot Terminal Protocol was published by Scout Comics. His other self-published books, including Raise Hell!, Finding Peace and We Have to Go Back, were successfully funded through Kickstarter, and his horror series Welderkin was published by Comicker Press. He is currently working on an unannounced graphic novel project.

Kath Lobo is a comic artist and illustrator from Costa Rica. Kath has worked for a variety of indie creators and publishers including Boom! Studios (Saban’s Go Go Power Rangers) and Mad Cave Studios. Others include Descent into Dread and The Love She Offered.

Lucas Gattoni is a pro comic book letterer, graphic designer & typesetter. He’s lettered mostly for indie creators around the world but has also seen his work published by IDW, Dark Horse, Scout Comics, and Action Lab. He lives in his home country of Argentina with his husband and their two unnamed goldfish (oops, make that one now).

Randy Stone has written, drawn, inked, or lettered various comics, including projects with Scout Comics and Arcana. Through his own small press Altruist Comics, Randy has published The Sensational Swan, the Crime Pays anthology, and his collection of shorts Death & Comics. All three were made possible with the support of Kickstarter backers.

FIRE VERSUS (WHY DID IT HAVE TO BE) SNAKES IN FIRE POWER BY KIRKMAN & SAMNEE #15
Power, Lies, & Corruption in DUNE: HOUSE ATREIDES #9
Sponsor