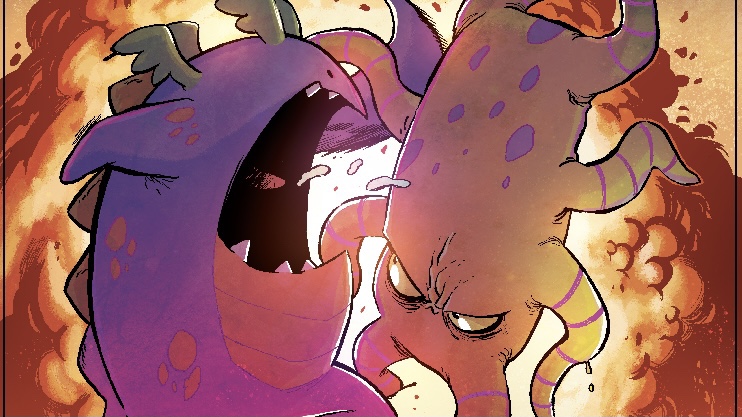 The most terrifying monsters in history are coming to Kickstarter with only one goal; TO CONQUER WITH CUTENESS! From Ox Eye Media and Rip Rap Toys, Cuddlee Kaiju: Season One launches in May with four original plush characters and an exclusive comic book ashcan.

Cuddlee Kaiju is a line of plush toys debuting with four HUGE personalities exclusively on Kickstarter: Wingnut, Thrasher, Squid Vicious, and Double Heather. Their official character descriptions are as follows:

Wingnut – Ancient Name: Wingoru – Air Assault Kaiju – For thousands of years, the dreaded monster formerly known as Wingoru commanded the sky. Domination was once a breeze for one of his hulking stature, but his days of conquest are over. These days, he longs for simpler satisfactions; usually a CUDDLEE and crushing snuggle will do.

Squid Vicious – Ancient Name: Squidormmu – Deep Sea Kaiju – The dark of the ocean is a haunting place, with beasts more terrifying the deeper you explore. None more sinister than the creature formerly known as Squidormmu! With tentacles of death, and a hunger for the souls of sailors traversing the seven seas, Squid Vicious has found a more effective way of luring vessels into the deep dark beyond; SQUATS.
The THICC-er the booty, the easier to LOOT-y….

Double Heather – Ancient Name: Dok Heeter – Inseparable Twin Kaiju – Born from the expanding layers caused by earth’s tectonic shifts, Dok Heeter’s monumental frame is tough as rocks, but that doesn’t mean they’re not sensitive. The first and only Inseparable Twin Kaiju in existence, Double Heather are more of a danger to each other than they are to the outside world.

Even more kaiju are set to be revealed at New York Comic Con 2022.

“The longevity of the Cuddlee Kaiju brand is our top priority, and we have tons of plans for not only this line, but also all those that follow. This campaign is your opportunity to get in on the ground floor of something very special,” says Garrett Gunn, chief brand officer of Ox Eye Media and Rip Rap Toys.

Cuddlee Kaiju is the latest brainchild from Gunn, who also co-created fan-favorite comic series such as Good Boy, Warcorns, Postmasters and more. Gunn is the writer of the Cuddlee Kaiju comic series, coming this year from Source Point Press. A collectible ashcan of the first issue is also available exclusively through the Cuddlee Kaiju Season One Kickstarter.

Exploring the origin of the Cuddlee Kaiju, the comic series follows Acclaimed Archaeologist Braxton Ravenscroft in his search for the mythical Hinode Gem. Legend tells of the gem’s ability to summon an ancient power. Enchanted by his professional curiosity and personal ambition, Braxton heads to the Japanese Alps in hopes that the mystical jewel can be found once and for all. But the secrets held by the gem, and the ancient evil it unlocks, endanger all of humankind.

The Cuddlee Kaiju: Season One campaign will last for 30 days, and hopes to raise $39,900. Those who love the cute and the dangerous can follow the campaign now at cuddleekaiju.com to be notified on launch.

Ox Eye Media is an international media company founded in the American midwest publishing books, graphic storytelling, board games and board game accessories in 10 different languages. Ox Eye Media’s newest division, Rip Rap Toys, is a premier toy publisher specializing in the extravagantly odd, debuting with the Cuddlee Kaiju: Season One Kickstarter campaign. Ox Eye Media also consists of other three major divisions: Source Point Press, Deep Water Games, and N3 Art. Source Point Press has garnered critical acclaim for its creator-owned titles, such as Cult of Dracula, Monstrous and Boston Metaphysical Society, and is known to expand existing fan bases into comics with adaptations like Gloomhaven: Fallen Lion, Butts in Seats: The Tony Schiavone Story, Twiztid: Haunted High-Ons and more. Deep Water Games publishes board games with innovative design and direct narrative focus, such as Floor Plan and MonsDRAWsity, which consistently earn mainstream praise from major media outlets. N3 Art keeps an “Artists first” approach to its production of quality gaming accessories. Ox Eye Media and all of its subsidiaries are devoted to creating a more inclusive and accessible industry in every arena in which they operate.