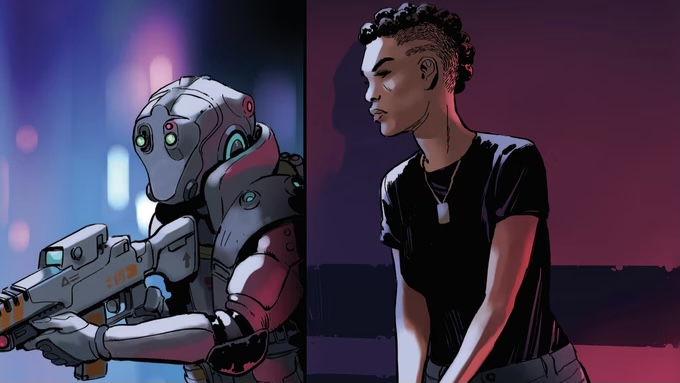 The world of THE DIARY OF THE STRAY DOGS

The series is set in the early 2100s and is about a ragtag group of mercenaries hired by various clients. From members of a secret society to various multinational corporations.

The world of the Stray Dogs is one where the major governments of the world have joined together to create a world of peace, but the countries outside of these developed nations were given the designation of the pirate nations.

The stories dive into these pirate nations and their interactions with the other world.

The Story: THE WOUNDED

This is the diary of Shani Belcourt, set in the 22nd Century.

A world where many things have changed yet some things stay the same. The pursuit of wealth, health, spirituality, and long life is still the main goal of humanity. Despite its many technological advancements, the world is still plagued with greed, corruption, and a disregard for basic human life.

In these pages, Shani recounts the events that start her on the path to becoming the individual she is today.

Who is Shani Belcourt?

Shani, the main character in this story, is a black female with a mixed Caribbean heritage who is a long way from home. But she has a dream of settling back down in her homeland in the West Indies.

Shani is an adventurous individual.  When we meet her in the story, she’s on the tail end of her contract with a private security firm. Trained as a pilot, she has gotten her team out of many a hairy situation but now it is time for some good old R&R. She and Alex head into the city for a wild night where they meet up with a bike courier Rossa, an individual who is always down for some sex, drugs and fun times.

Rossa is the other female main character in the story. She is a feisty redhead, with a no holds barred attitude and whose philosophy in life is “why work hard, when you can play hard?” Her job as a bike courier is convenient, as Rossa loves life and intends to live it to the fullest.  Her love for the narcotic Purple Ice, only rivaled by her unwavering religious belief in the one true savior of the time Edward Noch the lost astronaut.

Support THE DIARY OF THE STRAY DOGS

Beyond Publishing Caribbean, is a relatively new force in the international indie comics world. Rising up the ranks from its humble beginning over 10 years ago. Making a name for themselves on both the regional and international stage. Winners of such awards as ADDY awards, ANGEL awards, Glyph Comics Awards, and a number of local National awards in the field of comics.

CnS Comics with More Content than Ever Before!
Indie Black Comic Book Publishers You Should Know
Sponsor