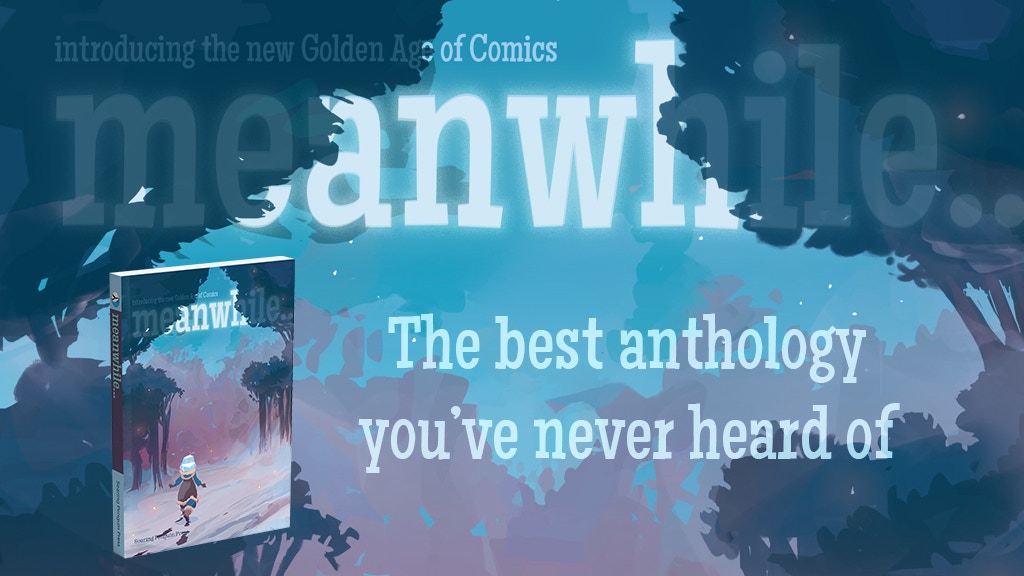 Soaring Penguin’s anthology of the weird and wonderful returns

Since 2015 Meanwhile… has published stories from every genre and showcasing the variety possible in comics.

This brand-new issue is an extra-large edition at 128-pages long, and features 16 stories from 21 creators. This includes the return of Meanwhile… classics such as Strangehaven by Gary Spencer Millidge; The Bad Bad Place by David Hine and Mark Stafford; Sarah Gordon’s ongoing series The Collector; and GailKey’s PsychicLost Item Helpline by Ginny Skinner, along with new stories from artists like Roger Langridge, Michael Doig, India Swift, Oisin Roche and Laurel Dundee. This combination of established and rising comic book talents is one of the hallmarks of Meanwhile…, as the anthology continues to bring new voices into the scene.

Soaring Penguin Press also continues to use crowdfunding as a way of increasing creator payments and Meanwhile… #10 is the first single issue of the popular anthology to use this method. The Campaign can be seen here: http://spengu.in/daf5Ltr and launches on 8th June 2021 at 7:30pm BST.

“I’m really excited to return to Meanwhile…! With issue #10, you can really start to see what the anthology is capable of: thoughtful, evocative stories, exciting stories, stories that catch you off-guard. It’s a collection of stories you’ll return to, and that will linger with you.”

“Issue #10 is a perfect jumping-on point for readers who haven’t discovered Meanwhile… yet (where have you been?) with Roger Langridge’s new series, Taniwha, starting and 11 self-contained stories by some of the greatest emerging creators in comic today. Plus we’ve got some incredible stretch goals including a brand new story by Peter Milligan and Steve Parkhouse (the team behind Dark Horse and SyFy’s Resident Alien) and an exclusive story by the legendary Howard Chaykin (Hey, Kids Comics!, American Flagg!)”

“With its enticing smorgasbord of styles and approaches to the comics form, Meanwhile… is a veritable feast of diverse creative visions. Soaring Penguin have embraced one of the great traditions of the medium—the anthology comic—and given it a relevant, contemporary, and invigorating voice.”
—Andy Oliver, Broken Frontier

“Meanwhile… is going to be hard to find… but you are going to have to make this your mission. It will be worth it.”
—Rich Johnston, Bleeding Cool

THROWDOWN BATTLE: Balbino Vs The View
On August 4, We Promised Utopia #1 asks what if humanity saved the world today only to destroy it tomorrow?
Sponsor