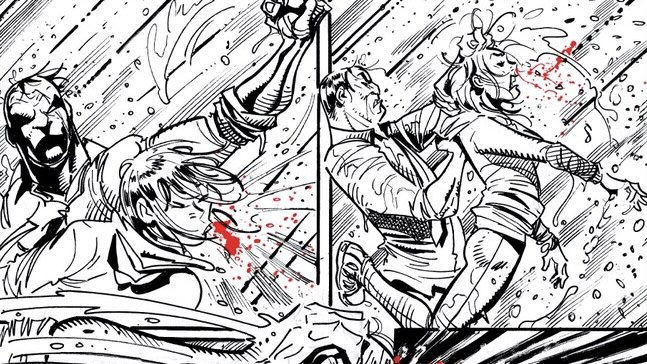 The darkly comic story of Jane Pearson, a seemingly ordinary teenage girl who becomes a brutally efficient killer for hire.

In issue five, ‘Atrocity Exhibition’ we saw Jane’s methods escalate as The Nexus began to close ranks and move against her, while Tougard himself showed his own fearsome nature as he moved against the rot in the organization. In the meantime Lewey was unmasked and his world began collapsing as he was forced to make the most devastating choice he could possible make.

In this issue we see Jane pushed to her breaking point as she goes head to head with her most fearsome challenge yet, the scarred gang leader, Torald Tougard. We also explore the fallout of Lewey’s decisions, and the rising suspicions of Jane’s closest friend, Kat.

With no training or special skills, just her own cunning, brutality, and fearlessness, Jane leaves a trail of bodies behind her. Ultimately going head to head with the feared and secretive criminal gang The Nexus, in a war that could ultimately cost not only her life but the lives of everyone she loves.

After spending 20 years working as a Guinness World Record breaking escapologist, sword swallower, and stuntman (David Straitjacket, look me up!), I decided to return to my first loves, music and comics. Plainer Jane is my debut book, it was originally planned as a one shot graphic novel but its world expanded somewhat until it made much more sense to release it as series of standard size US comics. It runs to 150 pages (approx) and will be 7 issues in total.