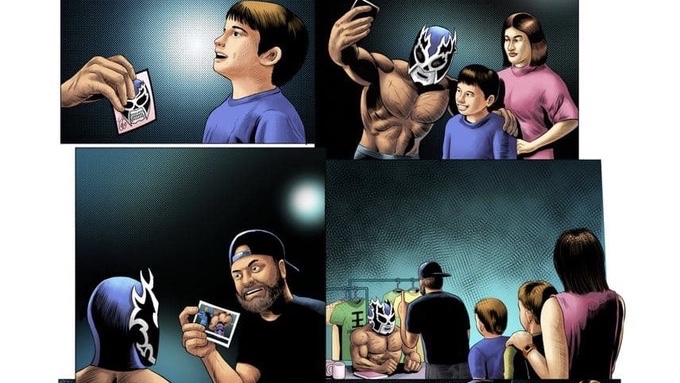 Will, thank you so much for agreeing to an interview! Tell everyone about who you are and your background?

I am the writer and co-creator of the new comic series Heel Turn currently available on Kickstarter. I am a father of 3, husband, OIF/OEF USMC veteran and avid pro wrestling fan. I am also the former media guru for the National Wrestling Alliance under the Bruce Tharpe ownership. I am also the creator of the NWA Ringside Magazine from 2014-2016.

I have been writing for fun since the times of Efederations on MSN groups in the early 2000’s. I have also wrote a novel and a few parody books available on Amazon. I have always loved comics and this idea came from being thought of as a novel but translated to a comic series. So writing has always been in my blood and now it’s my time to show the world.

Tell us about Heel Turn! Where did the idea come from?

Heel Turn follows the life of Ethan Johnson as he tries to keep his life together as an independent professional wrestler but with a twisted secret. Ethan is a serial killer.

I got the idea while writing my zombie novel, I jotted it down and put it on the back burner for a few years now. My time behind the scenes of pro wrestling and the long drives got me thinking this would be an easy way to get away with murder for awhile. Now Ethan does!

You describe the project as Pro Wrestling meets Dexter, which is a pretty unique Way of describing it! Give us a deeper look into the world of Heel Turn.

You can discover what has started this killing spree for FREE by visiting our website heelturncomic.com, SeerNova Comics, and Global Comix and read the Heel Turn #0 mini comic. But basically Ethan has been a pro wrestler for quite a few years and kills people whom have wrong him or have triggered an issue he is trying to deal with. It gives you a behind the scenes look at the life of a pro wrestler as well as what makes Ethan tick.

Who else helped with this book? Introduce us to your creative team.

Well I’m the Writer an Co-Creator, my phenomenal artist and other Co-Creator is Rogerio Rios. This is his first time in sequential art in comics. And to round out the creative team would be Bhakta from Beezzz Studio who is our colorist.

Our Kickstarter ends in just over a week on July 26th. You can visit it at inked.pub/heelturn. We are sitting at just over $1300 out of our goal of $2000. This book is completely finished and ready to go to print upon completion of a successfully funded campaign. It is 24 pages of Full color high quality art and story.

As for the tier we have several ranging from digital rewards to a vast array of physical options. We also have a couple of higher levels where you can become the victim in book 2 or even the agent that debuts in the next book and stays until the end of the 7 book series.

We are also offering for our digital fans a bundle offer for $15 you get both #0 and #1 digital PDFs of Heel Turn and your choice of 6 others from a list on our KS. For $30 you get both our books and the complete bundle of over 15 digital comics.

For the physical fans we are offering several options and once we get successfully funded all physical backers will get a Heel Turn Koozie.

We are also offering a variety of add-ons so you can essentially build your own package. And for our Retailer fans we have a special bundle offer for you as well.

What advice would you give to someone else getting ready to run their first Kickstarter?

Research, build a fan base, research and never stop learning, never stop updating. Find friends in the industry to give advice, work well with others and be honest, both with yourself and your fans.

Write it down, even if it is just an idea. Write it down, you never know what will happen, you may turn it into your own series one day! Heel Turn sat as an idea since 2015/16.

Will, how can people find the Kickstarter and support this project?

Our Kickstarter can be found at Inked.pub/heelturn or by searching Heel Turn on Kickstarter. As for us on social media we are on Instagram, Twitter, Facebook and TikTok all @heelturncomic.

GlobalComix: Free Preview of The New Amsterdam Game
A Desperate Chase to Save the World in EVE #4 from BOOM! Studios
Sponsor