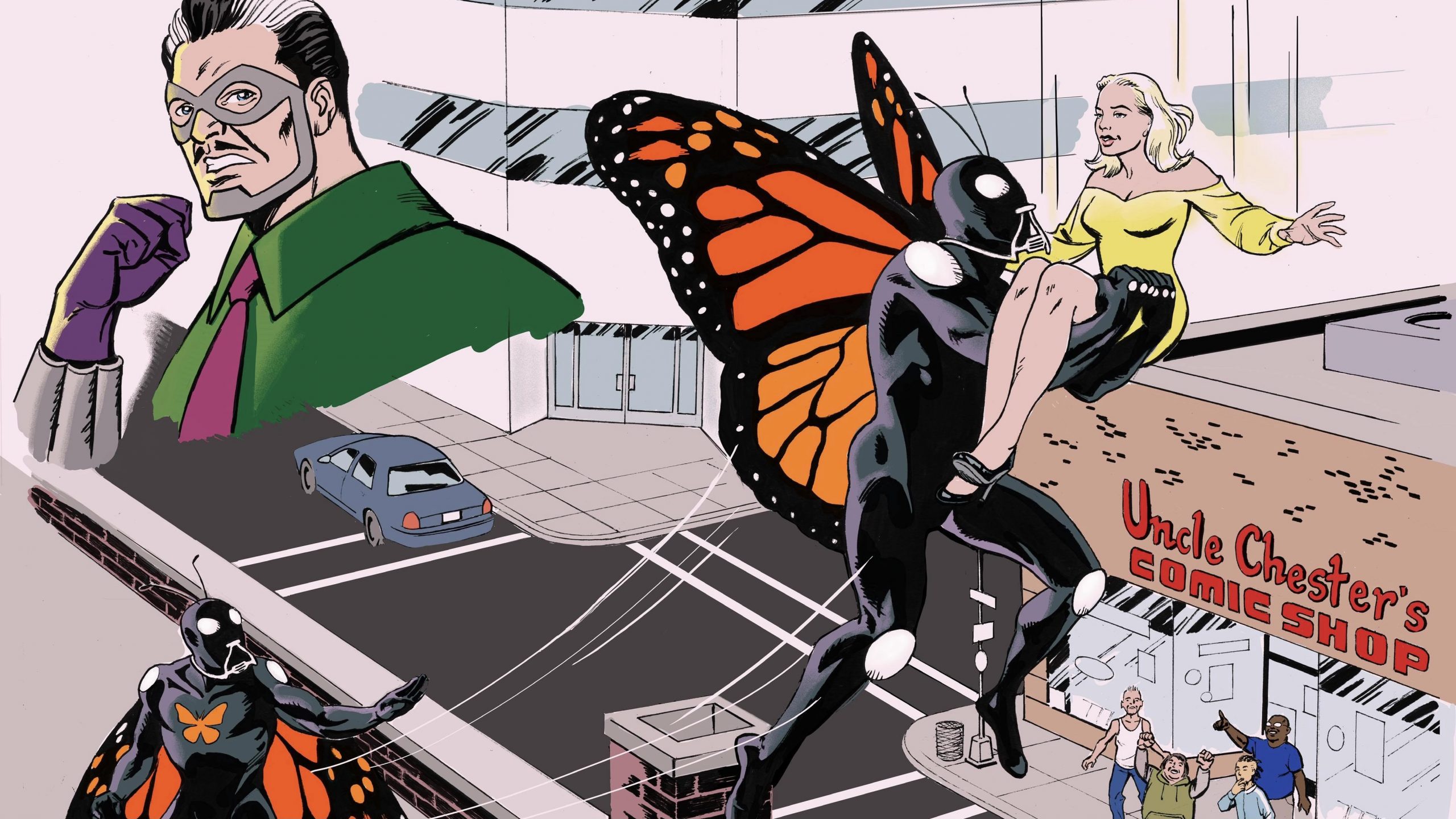 My Nandor, thank you so much for agreeing to an interview! Tell everyone about who you are and your background?

My interest in writing began with video game journalism, initially. I would write blogs and found a love for writing articles and interacting with others online. Eventually as I started to think about what kind of writer I wanted to be and what I actually wanted to write about, comics was the obvious choice. I grew tired of writing about what others were creating, I wanted to create for myself. I was curious to see what stories I had inside me and if I could tell them effectively. That led to what became SEASONS and, five years later, I’m onto my fourth project with Man-Child.

Tell us about Man-Child!

Man-Child, above all else, is an exploration of what it means to be an adult and live in a fictional universe of your childhood. It is an homage to the work and life of Stan Lee and the Marvel age of comics, as well as a commentary on comic book fandom. The series alternates between two storylines. The first taking place in a silver-age-inspired superhero world following the adventures of The Monarch-Crier and the second taking place in the real world with comic book super nerd, Rufus Boston. I noticed how people are told to “grow up” but also told to “stay young at heart” at the same time and that contradiction fascinated me. Comics, along with the idea of what a hero is, has also matured with its audience over the years, becoming grittier and darker. I wanted to strip everything back to a time where the core of a superhero was being established and juxtapose that with the modern day. I wanted to take that phrase “man-child” and deconstruct it. Grown-ups are the ones who made comics. Now, grown-ups are the ones reading them. Why is that? So, yeah, a lot is happening there, haha.

You’re working with some pretty great artists for this series! Tell us about them and how you ended up working with them.

Thank you! I’m so humbled and grateful. When I started writing comics, the thought of working with professional Marvel, DC, and Image Comics artists sounded impossible. To be able to say I’m now working with top artists like Well-Bee (Marvels X with Alex Ross and Jim Krueger), Tom Reilly (Immortal Hulk, Marvel Snapshots: X-Men), Nick Pitarra (Manhattan Projects, Leviathan), and Eisner Award-winning artist Tony Harris (Starman, Ex Machina) is an absolute dream come true on so many levels. All of them are extraordinarily talented in their own right and they all have such a unique style that differentiates them from one another, which was an important quality to have when I began seeking out whom I wanted to approach.

Since Man-Child is such a “comic for comic book fans,” I thought it would be appropriate to reach out to artists I’m huge fans of via social media or email and see if they’d be interested. I’ll just say it took a lot of emails and messages and depended on if the artist was available and if they liked the project. I sent each of them the synopsis, pages from the first issue, characters designs, etc. Anything I could to convince them.

Recently there have been revelations that Stan maybe wasn’t the best father, according to his daughter. How do you, as a creator, allow or not allow that to influence you?

I can’t speak to those revelations directly. I will say that at the outset, I approached Man-Child from the perspective of a fan of Stan Lee and his characters he co-created with Jack Kirby, Steve Ditko, and others. I wanted to give back because I’ve been given so much through his creations. However, it was vital that I take a step back and do research. So I read 3-4 biographies on Stan and the history of Marvel Comics, and watched many interviews with both him and his wife, Joan. Through this process, I learned many things I didn’t know, which was the whole point, of course. I wanted to find “the man” behind Stan “the man” Lee, warts and all. Stan Lee was a human being and human beings, like me and you, sometimes make mistakes. Should those mistakes overshadow or invalidate the joy and inspiration he’s given to millions of children and adults over the years? I don’t believe so.

The Kickstarter campaign is for Man-Child #1 and will run for 31 days starting August 2nd. We’ll have reward tiers as low as $5 for the PDF version of the first issue and as high as $200, which includes original artwork, being drawn into the story, getting your name in the acknowledgments, an original sketch, and more! The book itself will be $10. We’ll have early bird rewards for day one and shipping in the U.S. will be free for all single orders, too.

The three most important things you must know before running your first Kickstarter is budget, timeline, and promotion. You need to know how much everything will cost, how long it’ll take to get done, and how you’re going to get the word out. You want to start on all three of these things at least 6-8 months before you launch.

I would ask them, “Will you regret never making this?” If their answer is no, I don’t think they should take the leap. If their answer is yes, then that’s where they should start. You only have one life. Do what matters to you, not what others say matters. There’s never been a better time in history to start making comics. You’d be surprised how many people will flock to you and your story.

Nandor, how can people find the Kickstarter and support this project?

Here is the link to the pre-launch page for Man-Child #1. They can sign-up below to get notified when we launch so they don’t miss out on the early bird deals on day one. If the campaign is already live by the time this is posted, the same link will take them to the live campaign page: https://www.kickstarter.com/projects/306932693/man-child-1?fbclid=IwAR2LBUaIvyY9Y-mHd_VfkIgiKk2qfJU49i-TQVh6BRhjzA7aSiHWIKqjo3E

MIRKA ANDOLFO’S SWEET PAPRIKA #2 TEASES VARIANT COVERS TO SPICE UP SEPTEMBER
The PACK Is Back, with Its Heart on Its Sleeve
Sponsor