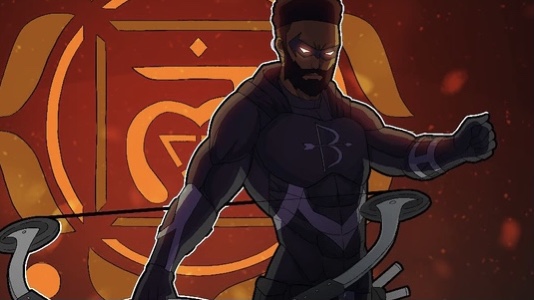 Jamal, thank you so much for agreeing to an interview! Tell everyone about who you are and your background?

Well for starters my name is Jamal. I’m a content creator with a history in art, music, hip-hop choreography and martial arts as well as a two-year associate’s degree in general science.

My friends always told me that I have a wild imagination. Out of all of them, I was always the one into action movies and Sci-Fi movies and I just finally wanted to tell a story like the ones I loved myself.

Tell us about Black Bow!

Black Bow is an intriguing story that follows the protagonist David Dab as he makes his transition from a man lost on an archaeological Expedition to a college professor at the University of Nickel City.

Take us through your creative process from idea to finished story.

When I first created the story I wasn’t sure if I wanted to take the manga or western comic approach. So in time, I came to tell the story as a combination of both styles. I wanted to tell an epic timeless tale but also a superhero story where the hero not only takes on a symbol and or name but also works hard struggles and gains new abilities as he goes on his journey like in anime. The Black Bow story deals with ancient mythology and the current issues of the modern era. Hopefully this series will have readers asking a couple things. Where is the true line between good and evil? What, who and where is God? and are we really alone in the cosmos?

Brainstorming, organizing and writing the ideas down is the hardest part for me. I’ve always been an improv go with the flow guy. That is the area of my craft I know could use a lot of work.

I’d say the best advice I’ve gotten from a creator is how to best utilize the power of social media to get your followers and support.

I think when someone I looked up to said that superheroes are corny and generic that kinda hurt but ultimately I learned I gotta keep pushin, its all apart of the game.

The kickstarter has been an anticipated event since I’ve started my career. So to my backers, again, I say you guys are making a dream come to fruition. As for the rewards I’m definitely excited to see the backers who selected the minor and major character tiers created as characters.

Be nervous because if you’re nervous that means you’re taking it seriously. Do all the research you possibly can and take all the tips Kickstarter gives you. Watch some YouTube videos on the subject matter of creating a Kickstarter and lastly utilize the pre-launch page that is a must.

Just jump and do it. Put it out there and you will start getting feedback. Join comic groups on facebook and add comics to your lists on Twitter. Being that this is my first go around at this I know I’m far from having all the answers but from what I do know what I described seems to be slightly working for me.

You can go to the link in my bio across all my social media profiles Instagram, facebook and twitter. Also you can go to blackbowcomics.com and find the kickstarter section that way.Or Lastly you can just go to kickstarter.com and look for black bow uprising chapter 1 and pledge that way.