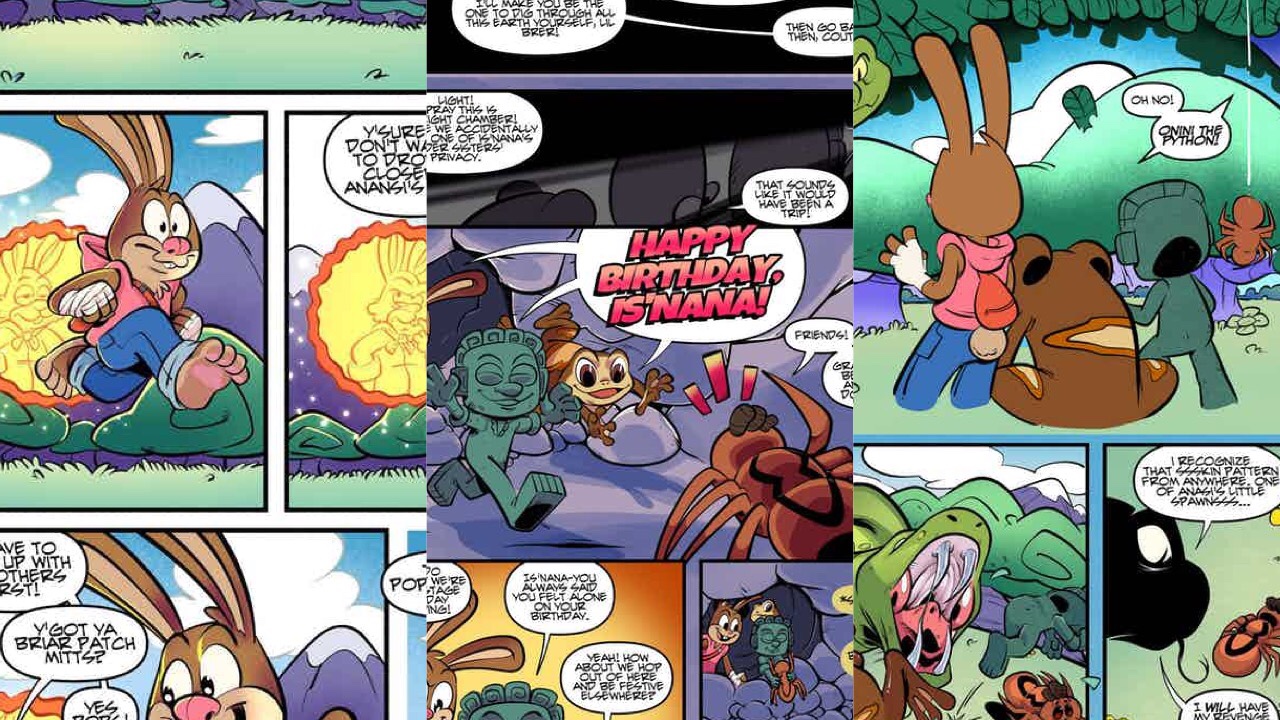 Greg, thank you so much for agreeing to an interview! Tell everyone about who you are and your background?

GREG ANDERSON ELYSEE: Hey, man! Thanks for having me. I’m a Haitian-American comic book writer and creator, my main series is Is’nana the Were-Spider. It is based on the stories of Anansi the Spider and other stories and traditions of the Black diaspora. A lot of my work tends to focus and showcase elements of Black culture and try to change the narrative in terms of Black representation.

ANDERSON ELYSEE: I’ve been writing since the first grade. It’s been my love and passion ever since. Second grade I discovered comic books and I started writing and creating my own characters in middle school after writing Batman fan fiction. High school after falling in love with writers like David Hine, Christopher Priest, Dwayne McDuffie, and Peter David, I bought David’s book on writing comic books and that was that. I knew that was what I wanted to do with my life. College I started taking Africana studies classes and learning about more Black spiritual and folklore characters and figured out what I wanted my series to be.

Tell us about Is’Nana! Where did the idea for these stories come from?

ANDERSON ELYSEE: I’m a huge Greek mythology fanboy. I taught myself a lot of it after being obsessed with Hercules and Xena from the 90s and the original Clash of the Titans. High school I started learning about Haitian deities and in college I learned a bit more. I started to feel a way that many Black people couldn’t name 3 or 5 Black deities from any Black culture but knew so many European gods and fairy tales, which goes back to what is conditioned for us to learn in school. So I decided Is’nana, the son of the god of stories Anansi the Spider, would be the next generation reclaiming our stories, modernizing them, and hopefully intriguing readers enough to seek out more of these figures and their stories. In particular Black readers.

Is’Nana isn’t a traditional series, each book is its own story that doesn’t continue from issue to issue, what led to this approach?

ANDERSON ELYSEE: I don’t like to hinder my own story telling, so I love to dabble and try different things as a writer. I tend to jump into things that interest me at the moment and feel the need to get out of my head right then and there. I will say I do have a plan. Each of the stories are actually connecting and leading somewhere, I’m just taking detours and telling the story in a non-linear way… but the connections are there and they will all come together. I just need the support to keep going.

Your books explore Black, African, and Caribbean folklore, why do you feel it’s important for that folklore to be explored in comic form?

ANDERSON ELYSEE: I think it’s important for it to be explored in every medium. We’re conditioned to accept and be knowledgeable on various European folklore figures and fairy tales but not educated on many Black figures. I mean, from historical figures to fiction… we get the same handful of Black folks throughout our lives… it took how long for people to learn about the Black Wall Street Massacre or even Juneteenth. Representation matters and it helps many feel a sense of pride when they see aspects of themselves reflected, aspects that aren’t usually showcased. And it’s also fresh and new, something very different, interesting, and exciting.

Let’s talk about Is’Nana Birthday Day! Tell us about this particular chapter in Is’Nana’s life.

ANDERSON ELYSEE: Birthday Day is a prequel. It takes place some time before Is’nana comes to our world in Volume 1. It takes place in the span of a day, essentially, where Is’nana sneaks out of his home to spend his birthday with his best friends, who are all outcasts in a way. Is’nana has to share his day with a bunch of siblings and feels invisible among them, and it doesn’t help that he doesn’t really have a relationship with Anansi at the time. So we get a little more of the coming of age aspect of the character, learn a bit of who he was before the bad ass were-spider. It also sets up some plot points and characters who will be important in the series.

I love the art in this story, it’s so different from your other Is’Nana tales. Why the change?

ANDERSON ELYSEE: Thank you! I’ve been loving George Gant’s work on this book as well. If you’ve noticed, there’s been a different artist on Is’nana in each story. I love experimenting when it comes to my writing and I never like to write a story the same as what I’ve previously done. And in doing that, I like to find artists to help bring out that particular writing and themes for that particular story. George’s style was perfect for showcasing Is’nana in his youthful element and the themes of innocence, friendship, and so on while style being filled with so much energy and action.

ANDERSON ELYSEE: Sure. So we launched the Kickstarter on Juneteenth and it runs until July 19th. You can pledge for a copy of Birthday Day as both a physical print or digital. We have the other Is’nana books available and various T-shirts from over the years; trading cards, drawstring bag. And of course various prints from different artists like David Brame, John Jennings, both from the critically acclaimed After the Rain, and my sister Blossom Blair has also done a print. I’m especially excited about the custom Anansi the Spider hardcover notebook!

ANDERSON ELYSEE: Take as long as possible to prepare, cover your bases, build a general interest and supporters. Make affordable rewards and be as clear as possible with your campaign. Look at various successful campaigns and try to emulate a lot of what they do. Find some time to step away from the campaign and relax. It’s mentally draining.

ANDERSON ELYSEE: Stop claiming you have an idea. Actually take out a piece of paper and pen, take out your computer, and put that damn idea down! Stop worldbuilding and creating all these characters and actually write PAGE ONE, PANEL ONE and write that damn freakin’ story!

And if you’re not going to write your story, who will?

Greg, how can people find the Kickstarter and support this project?

ANDERSON ELYSEE: You can find the kickstarter here: http://kck.st/2Un8A1T

We can use all the support we can get, so please be sure to check out this campaign and help us bring it to life. Trust me, you’ll be entertained!