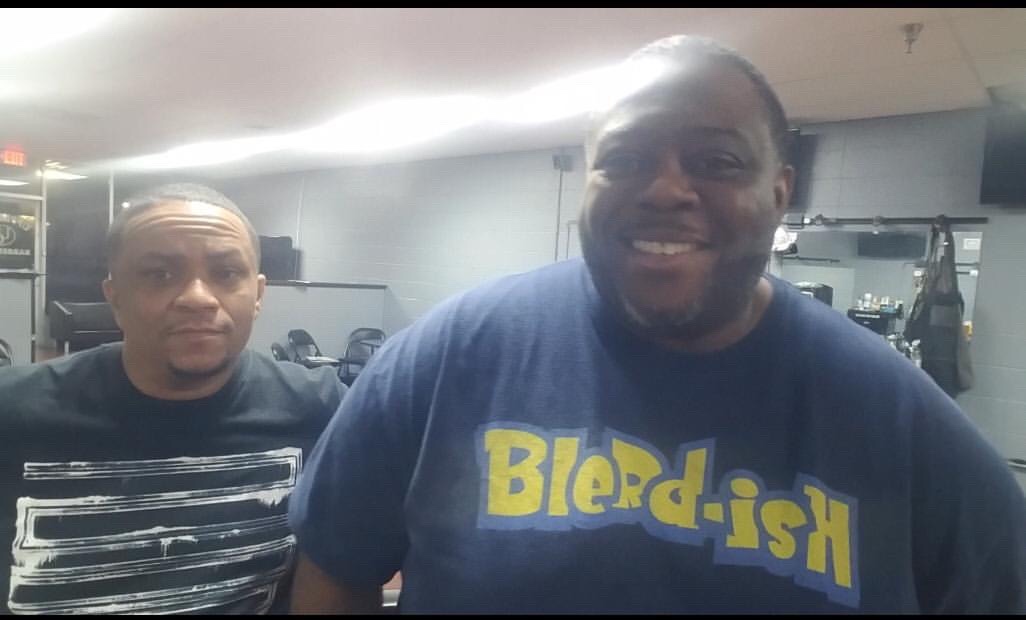 Thank you so much for agreeing to an interview! Tell everyone about who you are and your background?

Hi my name is Keith Cooper.  Blerd-ish is a podcast duo that consists of me and Mark Wallace. Blerd-ish is also a Black comics’ pop-up shop and distribution I operate as a platform to sell mostly independent comics.  We are Southern University graduates and are based out of Baton Rouge, LA.

Tell us more about Blerd-ish, how did you come to be a podcaster, comic distributor, and creator?

We started hanging out around the way a few years back after meeting through mutual friends. We basically found out we have a lot of the same interests. We both grew up loving comics and the usual pop-culture escapes that guys born in the late 70’s/early 80’s grew up loving. However, our nerd fandoms vary in such a way that discussing them never gets stale. So we decided to create our own podcast, trying to avoid the same old boring nerd hot takes and musings that are so common in this subculture. We really wanted to feature folks who look like us and create in these genres with black people in mind, and people who are doing something positive in their communities.

The podcast itself led to the creation of becoming a comic and art distributor for independent creators. One of our year one guests, Jason Reeves of 133 Art, helped kick it off by asking us to sell his self-published and printed comics and children’s books. That facet of the business wasn’t even a thought initially, but has been fun, fulfilling, and rewarding. We went from being distribution for one creator to having several talented and really remarkable artists gracing our table at various events like Wizard World, Essence Fest, and at various AVC conventions in the south.

Introducing people to comics and selling has led us to working on our own comic/coloring book Our book will be a parody of all sorts of geekdom and villains we encounter. I promise you will recognize some of the characters as people you may have run across in your everyday life. It will be a comical intersection of action, comedy, and every-day life.

Tell us about the stuff you just really geek out about? What’s your top fandoms?.

My top fandoms include a mixture of indie black comics of course.  One of my favorite series has been the Tuskegee Heirs and Harriet Tubman Demon Slayer.  I’m also into a lot of black speculative works from folks like Milton Davis and Nicole Givens Kurtz and things involving Afrofuturism.  One of our favorite guests on the podcast this year was interviewing Tim Fielder about the creation of Infinitum. His book is phenomenal.

My other fandoms include anime, (been growing beyond just the shonen for the past couple of years). I guess you can call this a fandom, the investment section of youtube.  It’s definitely something more creators and independent businesses need to learn more of after how the pandemic affected people’s finances. As far as Mark goes, he is a huge Batman fan.  A huge one to the point that he has a Batman tattoo.  We both do enjoy the MCU, the NBA and dabbling in a few video games here and there. I have probably become more of a retro style gamer as of late.

How did the blerd-ish table become a staple of fairs and cons?

I wouldn’t say the pop up is a staple yet as far as the national sized ones go but we hope to increase that.  I mostly have taken the approach of creating our own pop ups and collaborations with other vendors to stay consistent and efficient.  I will do small and affordable cons and a few midsize cons in my region. Con tables can be mind numbingly expensive especially when including the travel or hard to get depending on the person who is running it, and the general availability. The more expensive a con is doesn’t equate to profit a lot of times.  Honestly sometimes, I just may not have the means or want to pay for an event a year in advance, when I can put my money to work for me now.

Now as far as other types of events that is really the heart of what I do.  I mostly go where the everyday people are, whether it’s a pop up event, night market, hip hop shows, book stores, coffee shops, and restaurants.  This method helped us build within the business community in our city and to meet people in their daily lives.  Plus, some cons have been hit or miss and when they miss, it’s like a hole was burned in your pocket. Yet that doesn’t make me quit wanting to do a con, but it does make me more selective on certain factors before choosing to do a convention. One that I truly love doing is happening this weekend.  I will be taking part in the MS Comic Con by AVC Conventions this weekend in Jackson, MS. as of the time of this article. I recently did a new smaller one at Paragon Casino. It’s great to have that more one-on-one interaction with your customers.

Why do you feel it’s important to support indie creators?

It is important to support indie creators to support the creation of great ideas.  If a lot of these projects weren’t created by indie creators, it just wouldn’t happen or it would change from what it was supposed to be in the first place.  You are supporting folks’ possible way of life, income, and passion.  We think it’s great to be part of the economics and business that help these creations find life.

Now speaking as an indie podcaster, we definitely love the support and want to continue to be a platform that does reviews, a little mainstream stuff here and there. However, unlike those that just do needless nerd debate or weird hot takes,  we will always reach out to creators that appeal to us and simply let them be a platform to highlight themselves.  This includes all types of creators other than just comic book creators. We like to mix it up.

As mentioned above, Tuskegee Heirs and Harriet Tubman Demon Slayer are among some of my favorites. I will mention a couple others as well. I think Crescent City Monsters has been great. It has also been a pleasure being a distributor for it.   I knew it was going to be a hit for folk in Baton Rouge and other parts of southern Louisiana and beyond.   Folks are taken away by the black and white visuals and the fact that it is based in New Orleans and the supernatural aspect of it. My favorite web/comic series over the past decade has to be Bounce. That series has made me laugh and think for years now.  I can’t wait for more of it. Another comic strip I never miss is Beware of Toddler.  As a father, I relate to this one greatly.

How can an indie creator make it to your table?

They can easily just hit me up via I.G (@blerd.ish) or email me (blerd.ish1@gmail.com) and start a conversation.  That’s pretty much it.  The good thing (and sometimes bad), we have a finite amount of space. So If I run out of an item, I can immediately have another title in its spot as we receive one and sell out.  We try to sell a book to the bitter end, even if one is not a hit or is moving slower than expected. So far I have not sent any back to make space for others.  I rather have a waitlist to add titles than do what the bigger stores do. The goal is to get dope black comics out there to the world and find new readers.

How can people support blerd-ish?

Easily.  First off they can shop with us, listen to our pod, and even tip/donate via our site, www.blerd-ish.com .  Cash app is available  $blerdish.  The biggest thing is to always follow us and check  where our pop up will be.  It’s always great to have sales at the events we attend or host.

How can people find you and everything Blerd-ish does?

Always www.blerd-ish.com first for the podcasts, merch sales, our affiliates, and of course to ship books to you. Social media as follows: