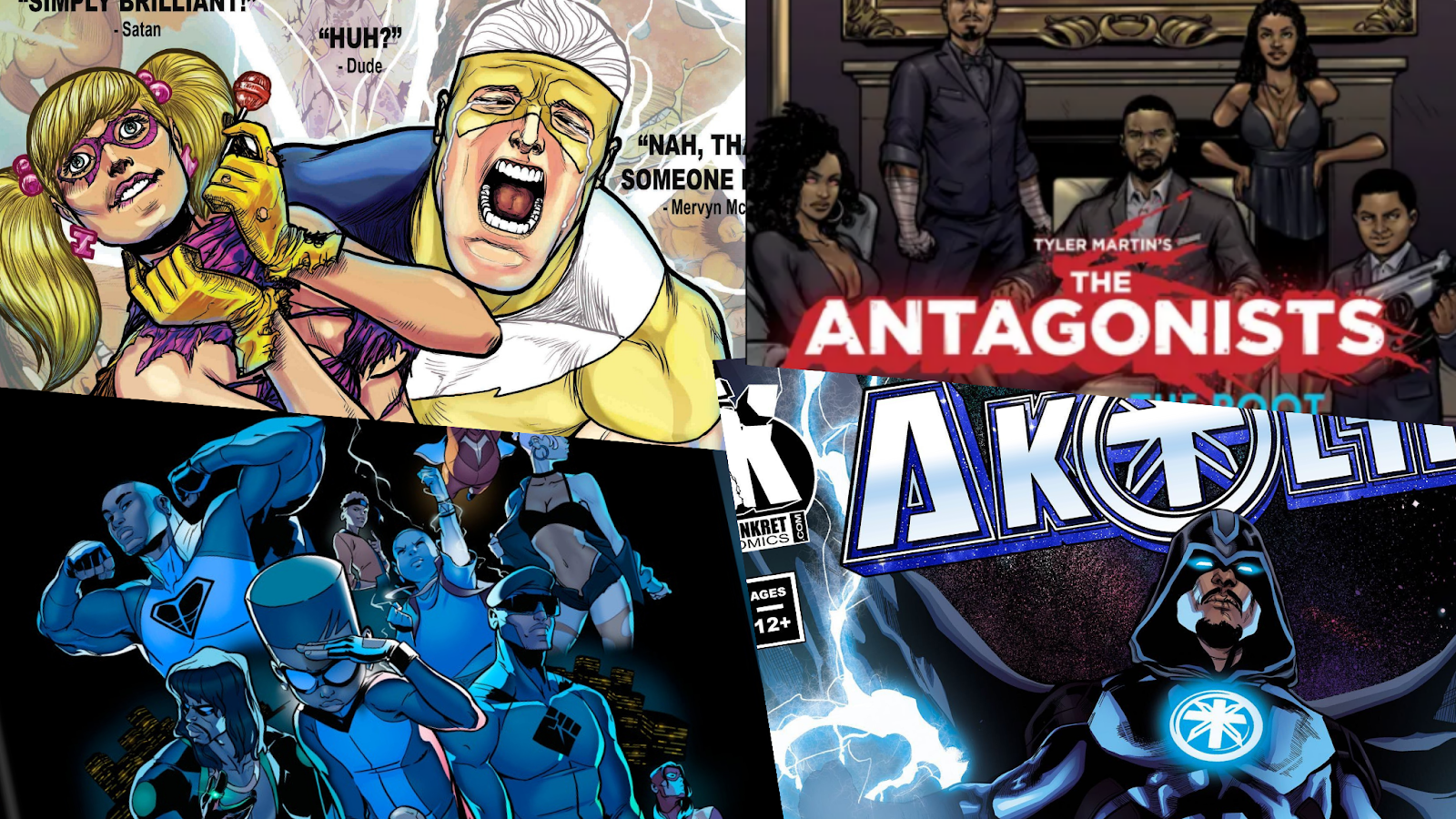 The indie comic book scene over the last few years has exploded with an astronomical amount of talent. Now more than ever, you can find a plethora of amazing new stories made by creators you may not have heard of; especially black comic book creators. When discussing black comics, before you may have only heard of a few mainstream creators. However, If you’re new to indie comics or are just interested in seeing amazing stories made by black creators, let this be your introduction to the variety of black comic book creators and their stories within the indie comic book scene.

When it comes to indie comics, Godhood Comics is killing the game. With stories like Mega Woman and The Antagonist, Godhood takes concepts such as superheroes and villains and adds a new level of depth. Of course, the art and character design is top tier, the plots are immaculate and the dialog is great which just makes any comic you grab from Godhood perfect for anyone who loves supers and villain stories.

As a black woman who loves comics, Dope Girlz Comics might as well be my kryptonite. Working alongside the never less than amazing Bristol Media Group, Dope Girlz Comics brought us the action-packed, wild ride that is Afro Demon. The comic is absolutely some of the best work the indie scene has to offer with clean and crisp art and a powerful story to back it up. If you’re an action fan then I suggest Dope Girlz Comics: Afro Demon to you.

If your looking to see when you can get your hands on a copy, as of right now, the Dope Girlz Comics website is under construction, however, it does appear they have a Kickstarter for issue two of Afro Deamon. They also have social media, so be sure to follow them on Facebook and Instagram: @dopegirlzcomics.

Wingless Entertainment has some of the most interesting comics I’ve come across. With titles such as the futuristic S.A.B.R.E Initiative and the dark fantasy comic Justice wingless has a great line of unique, peculiar, yet epic comics. I find the art to be wonderfully dynamic with interestingly staged panels and the story plot and dialog to be interesting and very natural. Overall a wonderful indie company to support with a lot of great projects dropping this year.

If you’re looking to follow Wingless comics or perhaps purchase some of their great titles, be sure to check them out on Instagram @wingless_comics or give their website a visit: https://winglessent.com/

Monarchs is great comic book series that blends Japanese manga styles with western comic ones. The characters have such a dynamic and unique design and the story is really fun and exciting which makes Monarchs super easy and fun to read. To say I’ve fallen in love with this series would be an understatement. The creator of Monarchs: Joshua Bullock has done a fantastic job at capturing so many different elements and incorporating them into his comics in a refreshing way.

If you’re interested in getting copies of your own go over to: https://www.monarchscomic.com/

There is so much to be said about Konkret. Much like the other companies and creators on this list, they are a true juggernaut when it comes to making unique and inclusive comic book content. With a plethora of characters on their roster, amazing art and dynamic stories your not reading, if your not reading Konkret Comics. With stories like Odina, Absolver, Akolyte, and Andy Starboy, there is a story for everyone.

If you want to see Konkret Comics for yourself visit their website https://www.konkretcomics.com/ and grab a few books for yourself!

A company that is always putting out high-quality content is Stranger Comics. Utilizing high fantasy, beautifully melanated characters, and top-notch writing, Stranger comics does an amazing job of captivating the reader and bringing them into their world and the quality of their work is 2nd to none for sure. With titles such as Untamed, Dusu, and Niobe, you are sure to be entranced by Stranger’s amazing stories.

If you want to grab a copy of any of the amazing titles of Stranger comics, be sure to visit their website: https://www.strangercomics.com/.

With an amazing catalog of both manga and comics, Midnight Comics is an amazing indie comic book company. They have exciting and enticing characters with interesting storylines to boot. With stories like The Unbeloved, Tales from Midnight, and The Grey, Midnight Comics showcases their diverse cast of characters, unique art styles, and range featured in its various types of comics. Additionally, it looks like they have a Kickstarter up for another issue of The Unbeloved, so be sure to back their project!

If you’re interested in supporting Midnight Comics or grabbing one of their titles visit: https://www.midnightcomics.org/

Providing you with the hard-hitting stories you don’t want to miss, Rexco Comics is absolutely something you should look into. Every title feels grandiose and epic due to its distinctive art style and way of storytelling. Featuring titles such as Fight of the Century and C-Listers, Rexco Comics is a company you should be adding to your list.

A brilliant tale of epic proportions, well-crafted and perfectly made; a true labor of love– that is the story of Trill Leauge. There aren’t many stories that really just stun me but Anthony Piper absolutely killed it with this one. The perfect amalgamation of clean art, hilarious references, a fun superhero concept, and the perfect amount of black culture, Trill Leauge is a great comic for new and old comic book audiences. This is absolutely an amazing read and a comic to add to your reading list.

If you want to pick up a copy of Trill Leauge for yourself visit https://www.trillleague.com/, as well as support Anthony’s Kickstarter that drops March 7th, 2022.

Please don’t let this list be the start and finish of your support of black indie comic book creators. Now more than ever, we need their voices, stories, and experiences in comics to help diversify and expand the world of comics. The amplification and recognition of black voices in this space does not only help the creators themselves, it helps you the reader too. To expand your sensibilities and ideas of what comics are and can become. Of course, there’s nothing wrong with the good ol’ boys, your traditional heroes, and characters whose stories you’ve heard before; but there is something so inexplicably exciting about immersing yourself in something new. And I, for one, am more than elated to share a bit of that with you.