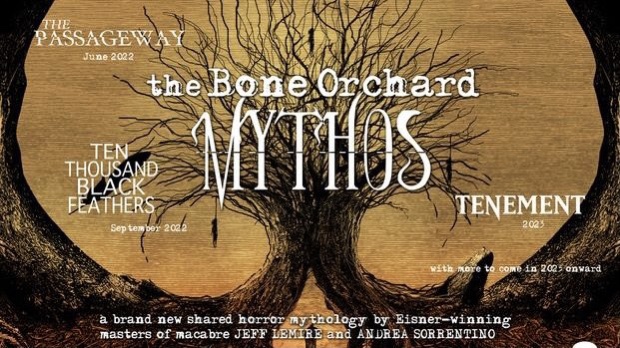 The Eisner Award winning, bestselling creative team that brought fans Gideon Falls and Primordial—Jeff Lemire and Andrea Sorrentino—will grow their empire with the launch of The Bone Orchard Mythos. This shared horror universe of interconnected stories will launch from Image Comics in 2022.

The Bone Orchard Mythos is an ambitious expansion for the powerhouse creative team and will span multiple books and across a variety of different storytelling formats. Each title will tell its own unique, self-contained tale—some as stand-alone hardcover graphic novels, some as miniseries comics, and some as longer format maxiseries comics—but they will all be set within the same world and add to the overall Bone Orchard mythology.

The team plans to release at least two new titles each year, for the next several years. In Summer 2022 the horrors begin with a hardcover graphic novel titled, The Passageway which follows a geologist sent to a remote lighthouse to investigate a strange phenomenon. In Fall 2022 Lemire and Sorrentino will follow up with a miniseries titled, Ten Thousand Black Feathers, and then another original graphic novel hardcover in 2023 titled Tenement.

“These will be just the first few projects in The Bone Orchard Mythos,” said Lemire. “But that’s just the start. We are planning a vast mythology of horror stories that will last for years to come.”

Sorrentino confirmed that he’s already several pages into The Passageway and that both Ten Thousand Black Feathers and Tenement have already been already plotted. “Jeff and I have been planning and plotting The Bone Orchard Mythos for over a year now and I think it will result in something huge for the years to come. Each one of these books is imbued with such a moody and a chilling atmosphere that is just so good to work with. Seriously, when we started discussing the project, I felt like I was finally home. These are the kind of stories I want to read as a graphic novel and comics fan, and the kind of things I want to draw as an artist. Every series and graphic novel of The Bone Orchard Mythos will help develop and show this vast hierarchy of horrors we’ve created while, at the same time, serve as a complete, stand alone story. I’m utterly excited that this news is now out in the world. I promise you we’ll all have a lot of fun with this.”

The Passageway original graphic novel (ISBN 978-1-5343-2224-0) will be available on Wednesday, June 15 and in bookstores on Tuesday, June 21. It can be pre-ordered at your local comic book shop or independent bookstore or via Amazon, Barnes & Noble, Books-a-Million, and Indigo.