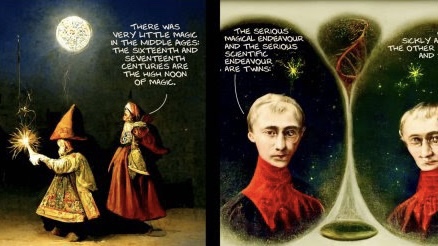 Living the Line Books and Diamond Comics are proud to present a pioneering new series: the first comic book entirely illustrated by a computer.

Award-winning oil painter turned Eisner-nominated cartoonist Carson Grubaugh has created a four-issue comic book series, The Abolition of Man, in collaboration with an AI image-generation system, MidJourney AI. For the duration of the miniseries, Grubaugh, an accomplished illustrator and painter, has handed over all illustration duties solely to an AI image generator, which operates by responding to text prompts from the user. For this first issue, Grubaugh supplied the AI with lines from C.S. Lewis’ groundbreaking lecture, “The Abolition of Man”, and used the images generated by the AI unit.

Surprisingly, the AI’s illustrations are compelling and haunting, creating a running commentary on the essay that alternately illustrates and expands upon the text. The AI, trained on images from the entirety of human art making, has created striking compositions that elevate and amplify Lewis’ thesis: that human’s ability to control nature will lead to a purposeless and diminished form of humanity. Alternately hilarious and terrifying, ABOLITION gives a chilling peek into the world of the future, where humans and their most treasured passions have lost all purpose.

The computer’s vivid imagery and illustration technique is reminiscent of the greatest of the modern surrealist painters, and the acclaimed work of comics veterans like Dave McKean and Bill Sienkiewicz. The final three issues of the series promise to push the conceptual gamesmanship to another level, with a near-future science fiction arc for issues two and three, and a machine/machine collaboration for issue four— with AI responsible for the writing as well as the illustration.

“It’s been a wild few months since this technology has slowly crept into the public consciousness,” says Living the Line publisher Sean Michael Robinson, “and I’ve been searching for art to make sense of this technological cusp. Grubaugh’s Abolition miniseries promises to capture both the wonder and despair inherent in this new technology.”

Artist Grubaugh says, “I’ve spent years as an artist abusing many different publicly available app-fads, in an effort to illustrate what could be called a ‘Banal, Content Apocalypse,’ in which we’ve generated so much semantic content that something genuinely new is near impossible to come by. These new art-making AI open up both new means for generating previously unimaginable content, but also speed the production to the point where all we will have left to us is to transmute the meaning-rich gold of the past into recycled lead of the present.”

Grubaugh concludes, “In a world where there is nothing new under the Sun, choose to change the Sun.”

The Abolition of Man #1 will be available in English-language comic book shops worldwide in October of 2022, distributed exclusively by Diamond Comic Distributors. It is available for pre-order at comic shops through PREVIEWSworld PullBox using item code APR228727. To find a comic shop near you, visit www.comicshoplocator.com

What do you get when you take a groundbreaking philosophical essay and feed it into an AI image generator, one line at a time? The world’s first (and only) entirely-computer-illustrated comic book, The Abolition of Man #1, by oil painter turned Eisner-nominated cartoonist Carson Grubaugh (Strange Death of Alex Raymond). Alternately hilarious and terrifying, ABOLITION gives a chilling peek into the world of the future, where humans and their most treasured passions have lost all purpose. Part 1 of a 4 issue miniseries.