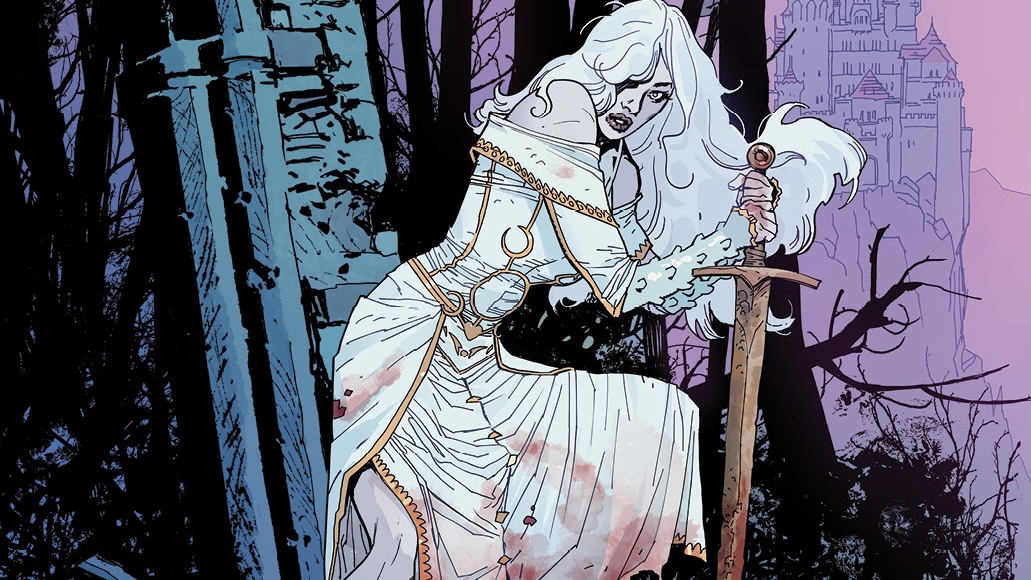 What if Sleeping Beauty never got her happily ever after… and instead had to save herself? Set in a brutal fantasy world that time forgot, this isn’t the fairy tale you know!

Christopher Cantwell is the current writer of the ongoing Iron Man series for Marvel Entertainment. His other comic book credits include The United States of Captain America and Doctor Doom for Marvel Entertainment, Regarding the Matter of Oswald’s Body and Angel for BOOM! Studios, The Blue Flame for Vault Comics, and She Could Fly and Everything from Dark Horse’s Berger Books.

Chris is also a co-creator, executive producer, and showrunner of AMC’s Halt and Catch Fire and additionally served as an executive producer on the first season of the upcoming TV adaptation of Brian K. Vaughan and Cliff Chiang’s Paper Girls, coming soon to Amazon Prime.

“I’ve never gotten a chance to tell a high fantasy story of any kind, but I’ve always wanted to, ever since I discovered old Robert E. Howard stories. One thing that kept me hesitant was finding a proper way in—something new and different that also celebrates all the sword & sorcery fun seen in the best of the genre,” said Cantwell. “In tandem, as I grow older, the world around us seems less and less stable with so many things falling into crisis. These two things came together in my head in the form of BRIAR… here’s someone that remembers the world one way, during a time of sheltered innocence, but has now overslept… and found herself in a place of complete entropic disarray. The question is, how will she even survive? And what happens when the plans for the entire rest of your life turn out to be completely meaningless and absurd? Where do you turn to in order to conjure up your own new meaning and purpose?”

Germán García is a comic book author and illustrator from Asturias, Spain. After creating his comic book series, Tess Tinieblas, he broke into the U.S. market as an artist for comic book series such as X-Men, Immortal Hulk, and Ka-zar: Lord Of The Savage Land for Marvel Entertainment, Action Comics for DC Comics, and most recently Barbarella/Dejah Thoris for Dynamite Entertainment.

“I’m delighted to be telling this story with Christopher. I love a good fantasy tale where I’m not constricted by boring details like reality, especially when we’ve got a main character with very intense but relatable motivations to fuel her through this strange new land. Can’t wait for you all to step into the world of BRIAR!” said García.

“We are thrilled to be working with Christopher again, and with Germán and Matheus for the very first time, on this brand new fantasy epic born out of the legend of Briar Rose, the Sleeping Beauty,” said Eric Harburn, Executive Editor, BOOM! Studios. “Unlike any fairy tale you’ve read before, BRIAR is the story of a heroine who takes survival into her own hands, even if it means getting them a bit bloody. My advice – don’t sleep on it!”

BRIAR is the newest release from BOOM! Studios’ eponymous imprint, home to critically acclaimed original series, including BRZRKR by Keanu Reeves, Matt Kindt, and Ron Garney; Something is Killing the Children by James Tynion IV and Werther Dell’Edera; Once & Future by Kieron Gillen and Dan Mora; We Only Find Them When They’re Dead by Al Ewing and Simone Di Meo; Seven Secrets by Tom Taylor and Daniele Di Nicuolo; The Many Deaths of Laila Starr by Ram V and Filipe Andrade; Eve by Victor LaValle and Jo Mi-Gyeong; Basilisk by Cullen Bunn and Jonas Scharf; Faithless by Brian Azzarello and Maria Llovet; Alice Ever After by Dan Panosian and Giorgio Spalletta; and Grim by Stephanie Phillips and Flaviano. The imprint also publishes popular licensed properties, including Dune: House Atreidesfrom Brian Herbert, Kevin J. Anderson, and Dev Pramanik; Mighty Morphin and Power Rangers from Ryan Parrott, Mat Groom, Moises Hidalgo, and Marco Renna; and Magic from Jed McKay and Ig Guara.

Print copies of BRIAR #1 will be available for sale in September 2022 exclusively at local comic book shops (use comicshoplocator.com to find the one nearest you) or at the BOOM! Studios webstore. Digital copies can be purchased from content providers like comiXology, iBooks, Google Play, and Kindle.