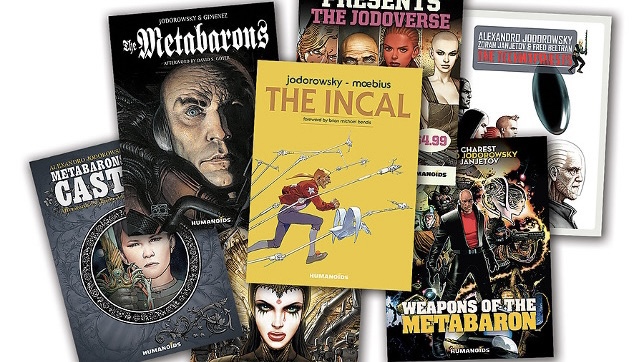 Humanoids, the critically acclaimed publisher of international science-fiction, fantasy, and cultural icons including Alejandro Jodorowsky and Mœbius has announced a partnership with the digital publishing platform GlobalComix to release over 150 titles and more than 480 books on GlobalComix.com starting today.

Humanoids has been a renowned name in the industry for more than 45 years, starting in the early 1970s under the name Les Humanoïdes Associés. From their vast — and growing! —  library of comics, to countless contributions to the world of pop culture at large, being particular inspiring to creators in the film and TV space, Humanoids continues to leave an indelible mark on the entertainment industry.

“Innovation has always been at the heart of Humanoids, and finding partners, be they creators or distribution partners, who share that value and bring expertise in their respective field, is always the opportunity for exciting and disruptive possibilities. We are thrilled to partner with Chris and the team at GlobalComix to do just that, combining our rich catalog to their innovative approaches to making digital comics accessible to as many folks as possible,” said Alex Donoghue, COO U.S. Operations.

With this partnership, digital comic readers will have the chance to experience some of the most prestigious stories the medium has to offer. Readers and fans from around the world can access the Humanoids catalog at GlobalComix.Com.

“We believe that amazing comics should be accessible, no matter where they’re made, what language they’re in, or how they’ve been formatted. Humanoids is an exceptional example of comics that transcend language and cultural boundaries, and we are absolutely delighted to help bring their stories to even greater audiences internationally”, said Christopher Carter, CEO and Founder of GlobalComix.

To celebrate, Humanoids has made more than 100 issues free to read on GlobalComix. Readers can sign up for GlobalComix Gold to unlock the entire critically acclaimed Humanoids library, as well as thousands of other comics for only $7.99 a month.

Based in Hollywood, California, with branches in Paris, London, and Tokyo HUMANOIDS was co-founded over 45 years ago in Paris, France, by legendary creator Mœbius, and has published thousands of titles since, including international bestsellers and iconic series such as The Incal and The Metabarons.

GlobalComix is a digital comics publishing platform that enables comic creators publishers to upload, publish, monetize and translate their content to a global audience in multiple languages including French, Spanish, Greek and Portuguese. Headquartered in New York, GlobalComix is a private venture backed startup led by a team of professionals with backgrounds in software & product development, design, technology, and communication. https://globalcomix.com