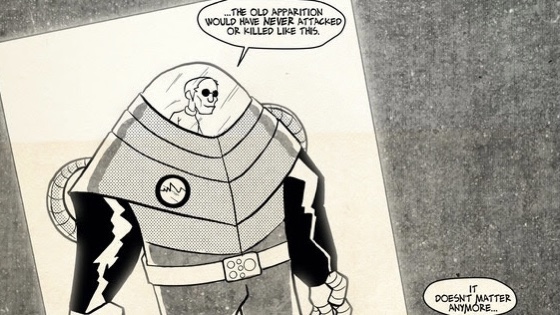 Australian cartoonist and comic book creator Kieran Jack has a mainstay on the Australian comic book scene. This time, though, he’s returned with a new bag of tricks in his latest instalment of The Apparition.

The Apparition is a ridiculous pulp parody of all the classic heroes you’ve come to years from the twilight of the 20th century until now. If your taste buds salivate at the sight of comic book action from the likes of Sin City, The Mask or The Shadow then you’re going to find more than enought tasty morsels in The Apparition: Part 2.

The Pulp parody concludes here! The Apparition is at breaking point after meeting his partners killer, The Skull, now The Apparition is out for blood! The Skull is not making it easy for The Apparition to find him, at every turn The Skull has a play to push our hero over the edge, from using B grade villains or taunting his old band of heroes.

Part 2 of the Apparition sees a collaboration between Kieran Jack and his wife, Clare Jack, taking on the writing duties. Joining the two of them for this instalment is veteran letterer Graeme Jackson (Wrath of the Cursed, The Demon, Dark Nebular).

Illustrators Ash Madi and Sanju Nivangune have joined in for an absolutely stunning limited edition hollow foil cover. Madi whose recent work in Vampirella is the most recognisable. Whilst Sanju has also collaborated on a variety of DC comics projects including Batman/Superman.

What the Comics Industry is saying:

“It subverts expectations for stories like this, which in of itself becomes a double subversion. It’s not what you think it is, and The Apparition is a book for the curious.”
– ComX Network

“The Apparition is a story that isn’t your typical everyday superhero. This series takes the tropes of heroes and throws it into a parody & satire mix, blending the golden age of comic books!”
– Dee’s Comics

“The Apparition echoes black and white issues from the 1930s and 40s, satirising the tropes of the heroes of yesteryear.”
– Super Serious Comics

REVIEW: Monsters: The Forsaken 1-4
Your First Look at the Dark Ritual in HOUSE OF SLAUGHTER #2
Sponsor