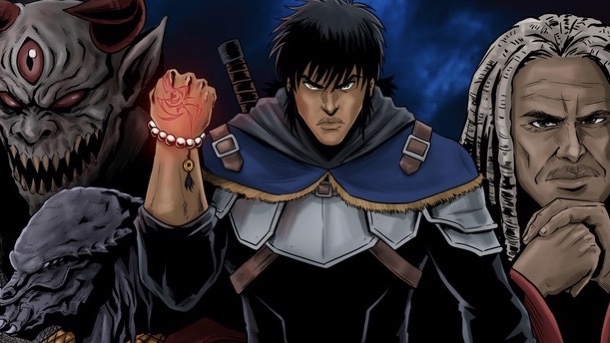 Salvation is the story of Vahn. Vahn is a Relic, a being of both Demon and Human heritage, fated to live a life of tragedy and conflict. Vahn is an outcast amongst both Demons and Humans due to his bloodline and a powerful yet mysterious mark Vahn has come to view as a curse. At nine years old, Vahn’s life was shattered when his hometown of Moonvale is destroyed by a vengeful Demon lord. Vahn watched helplessly while his mother was engulfed in flames, and so too was the life he knew. The lone survivor of the Moonvale Massacre, Vahn’s desire for revenge becomes an obsession. In the following years, Vahn undertakes grueling training regiments to advance his combat prowess. After settling down in Blackoak, Vahn falls in love with Sylvia, a prominent knight in the town. Having now established a new life, Vahn’s obsession is seemingly forgotten. However, Vahn is soon cast off from Blackoak due to his lack of control over the power hidden within the curse mark. With a new purpose, Vahn seeks out the legendary warlock Solomon, whom he believes can free himself of the curse mark in hopes of finally finding salvation.

In Issue #2 Vahn arrives at the city of Selise, Vahn inches one step closer to removing his curse mark with the possibility of finding the great warlock, Solomon. This proves troublesome initially, when Vahn becomes locked in a duel, this duel results in an unexpected chance encounter with Solomon. Finally having met the legendary warlock, Vahn expresses a sense of hope, believing Solomon will be able to free him from the curse mark. Instead, Vahn learns that there may be more to this mark than he ever assumed. What other details about this mysterious will Vahn discover? Why was he chosen to bare such a mark? How much information does Solomon know? Will he ever be free from this “curse” mark?

Animation Comics & Entertainment LLC or A. C. E. for short, is an Indie Comic Publishing company from Brooklyn, NY. A. C. E. was created by Dwayne Robinson Jr and Terence Young who are childhood friends who wanted to use their creativity to make compelling stories for the world to enjoy.

Get Salvation #0 & #1
Liked it? Take a second to support ICD on Patreon!