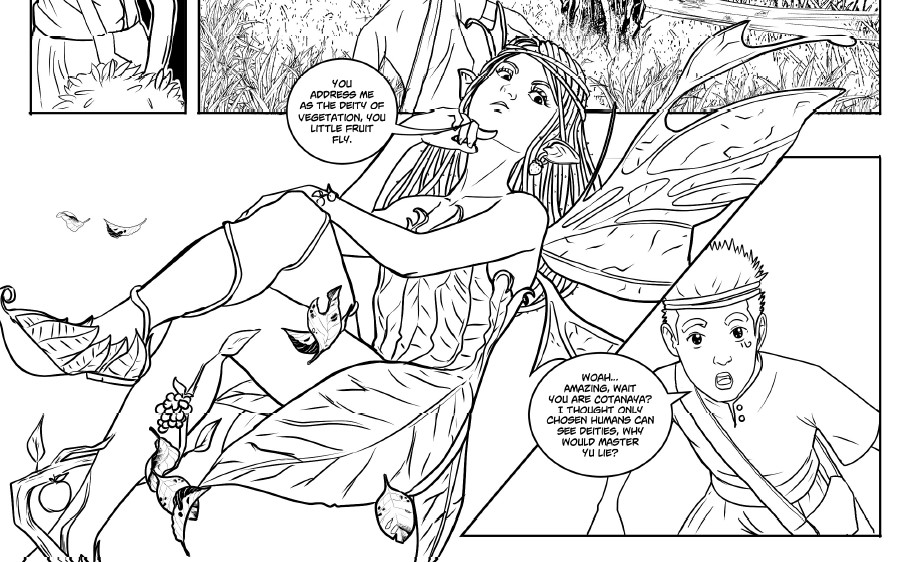 Book Description: This is a comic that was funded on Kickstarter in January this year. The story is set in Takatifu, a holy land at the centre of its world.. There are a mix of fantasy/ magical type species in Takatifu. The original inhabitants were dragons, leviathans and griffins. Later newcomers were deities, humans, royals, demons and angels. Takatifu is ruled by the Oda Royal family the current king being Ekon Oda III There is a general dislike of the Oda Royal family by the whole population which itself is divided into competing gangs and families. The royals took over ruling Takatifu several generations ago but there has been little change for the better for anyone since then. It was the royals who issued edicts that encouraged the formation of the families, clans and gangs amongst their subjects all of whom now clamour to control territory and ultimately to take on the brutal King's Game. The story commences by showing a youth, Iru James, and his two friends, Jenny and Toki as they practise their martial arts under the tutelage of their elf teacher Yuri. It is their ambition to compete in the vicious King’s Game. As noted this is the same ambition as many others hold. It seems that victory in the Kings Game results in taking over rulership of the land from the unpopular king Ekon Oda III who will be fighting in the Game to maintain his rule. The three friends are practising their martial arts hard, though still have much to learn. Yuri, their teacher, seems left to go on a journey some time ago but is now significantly delayed in returning to the extent that the trio are speculating on his whereabouts and whether he will ever return. He does in fact return shortly into the story but gravely injured having battled a false deity called Nara. Yuri’s injuries are such that he needs magical healing herbs to revive him and he selects Iru to go to the Rebirth Forest and find Cotanaya, a spirit type creature who is able to provide the herb. The story goes on to show the inexperienced Iru’s troubles as he seeks to complete his mission in a land where he is largely unaware of the dangers. He ends up clashing with a dragon riders gang and as he is joined by his teacher and two friends in the final fight it becomes apparent that he has significant, previously undiscovered, powers that mark him out as a special individual of royal blood.

The comic is presented in a very strong, manga style. The protagonist and supporting characters are all distinct and well defined and it is clear from the outset what Iru’s  goals are but also that he still has a long way to travel/ develop  as he moves towards that goal.

Takatifu, the setting for the story, is a rather complex world that we only get to see through the lens of the isolated protagonist and his friends and what his teacher, Yuri tells him of the world. This limited third person perspective does strengthen the focus of the reader onto Iru’s challenges; however, it does also set all of this within the context of his restricted worldview. This does make the world in which the story is set a rather confusing place at times because just as Iru has a limited view of the world, so does the reader.

This is just my personal opinion but given the complexity in the world and wide range of species and the clear opposition of all of them to the ruling royals it would have been good to see some of the storyline from other characters’ perspective. We do get this a bit from the Dragon Rider gang but it is still quite limited.

I think that in particular as the overarching storyline seems to be the Kings Game where the universally unpopular king Ekon Oda III will defend his kingship it would be effective to introduce the perspective of what seems to be the ultimate antagonist into the storyline early on, even to a limited degree. Perhaps another way of doing this would have been limited use of flashbacks again from the king’s perspective.

The storyline does set up conflicts for the protagonist who does transform  as a consequence of taking these on and it is clear from the ending that Iru is being set for greater challenges in future volumes.

The copy I received did not have a cover so I can’t comment on the cover art and have set its score at that given for internal art. The internal art is in black and white. The artists were from Macchiato Studios and it is in a very well delivered manga line art style. The action panels are very energetically represented and there is good use of facial expressions and poses to reinforce the narrative.

All that being said I do think that the art style would have been better served by being coloured. I do like black and white art but it has to be of a simpler format than the somewhat complex panel content in the story.

I checked out the Macchiato Studios website, their coloured art is very vibrant and I think would significantly ratchet up the energy in the storyline of ‘Two Kings’.

The dialogue is well presented with characters having clear ‘voices’ and onomatopoeia is well used.

It will be interesting to see how the storyline develops in future volumes. It seems that Two Kings is the start of a build up to a climactic Kings Game scenario that has a lot of potential for the clash of competing character interests.