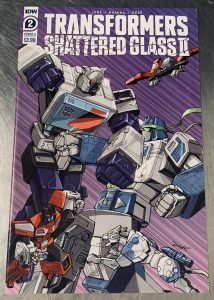 Book Description: It was believed by many that Blaster didn’t survive his encounter with Megatron and Starscream. Somehow he did. Ultra Magnus is aware that Blaster still functions. Ultra Magnus has ordered Slicer and Rodimus to send Blaster on a mission: infiltrate and deactivate Soundwave’s broadcast station. Failure will not be tolerated.

Reader’s Notes:
The primary plot line of “Transformers: Shattered Glass II” revolves around Ultra Magnus making a play to rule Cybertron. I found this issue to be surprising. Aside from the recap, we never see Ultra Magnus in this issue. This issue goes to great lengths to demonstrate what Blaster’s personality is like in this issue.

Blaster sees himself as the star of the show. He’s the rockstar, director, and leading actor, all rolled into one. Rather than focusing on his mission he allows himself to become distracted to the point of alerting Decepticons of his presence.

It may be an alternate universe; but this is a far cry from the Blaster I knew and loved as a child. He was easily distracted then. He didn’t have an ego big enough to fill Optimus Prime’s trailer though.

It took some time to get into the flow of this issue. There are times that the reader feels that something happened that’s been omitted. There are also times where it is unclear where on the timeline the story is and that can be confusing.

While it isn’t my favorite “Transformers” cover ever, this one is certainly up there. Mr. Khanna’s depiction of the two iconic communication specialists duking it out is something to behold. The only thing missing was more of the cassettes. Adding more characters would have made the cover too busy though.

Mr. Khanna’s work on the interior pages is outstanding. We get crisp lines and vivid detail. I love the alternate universe coloring schemes. It would be nice to see what some of the other greats would look like in this universe. I don’t think it’s feasible to tie that many characters into this story though.

As a Transformers fan, I’m usually shouting from the rooftops about any new content. The second installment of “Transformers: Shattered Glass II” has me hesitant to do so. It has great artwork and a fair amount of action. The flow is holding this geek on a budget back. When I’m reading I want to fall into the story. That did not happen with this issue.