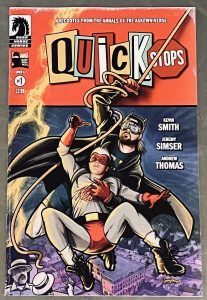 Book Description: “Quick Stops” #1 begins at the 10th annual Chronic-Con in Hollywood. Alyssa Jones is hosting a panel with the creator of Bluntman and Chronic, Holden McNeil. During the Q and A, one of the guests asks Holden where he got the idea for the title. Holden answers with a story that goes back to when he spent a summer working at the Quick Stop in Leonardo and had these two customers, Jay and Silent Bob…..

“Quick Stops” made it onto my radar when Mike Zapcic told me about the title when I was in Jay and Silent Bob’s Secret Stash over the summer. Having spent most of my adult life as a fan of “Clerks” and the rest of the franchise, I was very eager for this title to be released.

Kevin Smith hits all the right notes for fans of the franchise. There are plenty of Easter eggs for them as the issue moves along. My personal favorite was the milk maid.

Between Alyssa and Holden’s banter and the adventure Holden describes the story moves at a very fast pace. I felt like I blinked and it was finished. That isn’t necessarily a bad thing. In this case it means the book was easy to fall into.

The artwork on the cover has a very retro feel to it. It helps pull people straight back to the 90’s. Having the “Quick Stops” logo in the same design as the “Clerks” logo was a very nice touch.

The artwork on the interior pages is very well done. One panel is VERY graphic. I don’t know if I will ever be able to unsee that. That comes with the territory with some of Kevin Smith’s work. For better or worse, he ensures his work will be remembered. It’s almost like a rite of passage.

If you’re not familiar with the franchise, be prepared for some language, drug references, as well as brief nudity. If those aren’t your jam, there are plenty of other titles out there. With that being said, as a fan of the franchise this geek on a budget is all in on “Quick Stops” #1. It’s the book that the fans need and deserve. Snoochie Boochies!