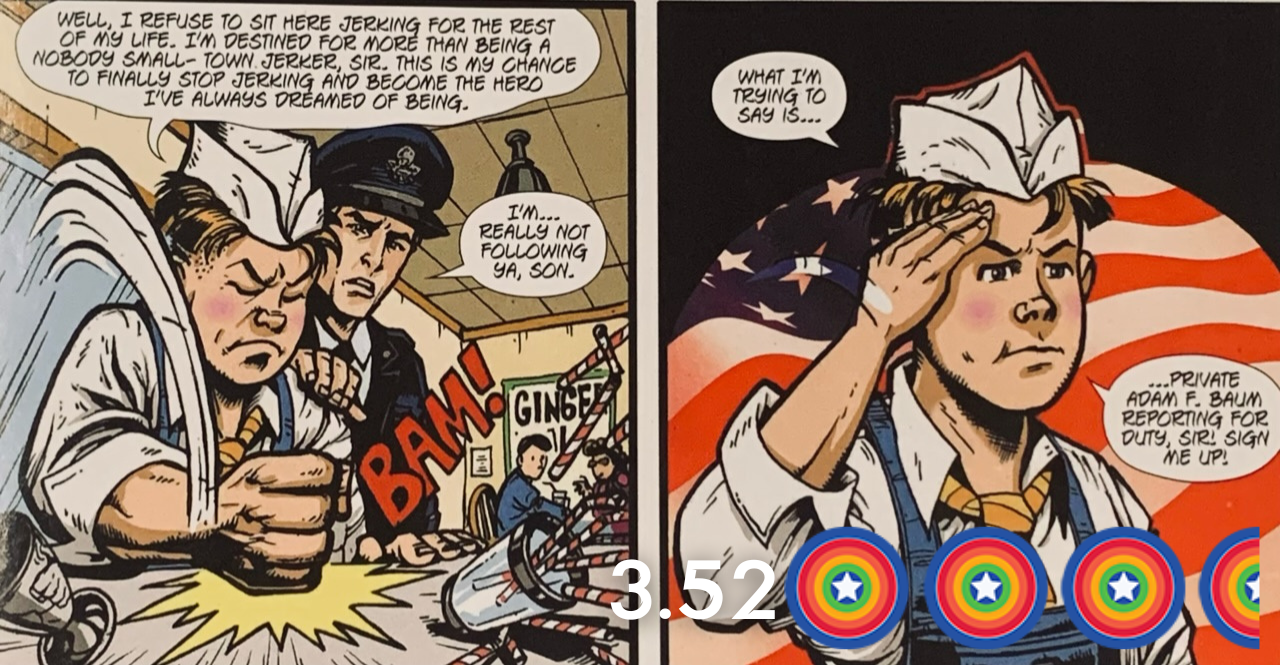 It’s WWII. “Boomer” Baum is on a bombing run when his plane is shot down by the Axis forces behind enemy lines. The U.S. Air Force has no way of knowing if he survived the crash. When Department of Defense officials break the news to his brother, Asam, he volunteers to join the service and carry on in his brother’s stead. The only problem is Adam gets rejected by the military.

Adam is approached by Doctor Brainsfeld. She’s a leading scientist that has an experimental project that needs volunteers. She assures Adam that by participating in this experiment he can serve his country AND save his brother. Initially the experiment is a success. Then some unexpected side effects occur that could change the course of history.

Like many of the children from the 80’s I collected Garbage Pail Kids cards. At one point I must have had 500 of them. They were sacrificed in the infamous yard sale of ‘90 that I am still trying to recover everything from.

I bought this book for the nostalgia of it. I wasn’t expecting a story. What I had envisioned was more akin to the “G.I. Joe: Order of Battle”. That title was a four book series that had a picture and short biography/description of each character and vehicle (to date at that time).

Clearly some thought went into this story. It has a solid foundation. How the characters transition from the stations in life they had to the characters we have become familiar with is a little bit of a stretch. With that being said, it makes more sense than having a hero that nobody recognizes as an ace reporter because he took off his glasses and changed clothes.

Zapata’s cover is everything you’d expect from a book that has core roots in the 80’s. A huge character, bulging muscles, explosions… All the bases are covered. The only thing missing is neon colors and an exotic car.

The work on the interior pages was like doing a time warp. The artistic style made it feel like a lot of the content we got in comics back in the day. The reader instantly gets pulled in with Boomer’s run on the first page and the story never lets go.

“Garbage Pail Kids: Origins” #1 isn’t “the great American novel”. I wouldn’t expect that from a title based on a product line that was the trading card version of “Mad Magazine”. It is good for some laughs and has a plot that leaves one curious to see what happens next. As a geek on a budget that makes this one aces in my book.