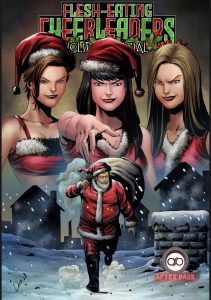 Reader’s Notes:
With the holiday season upon us, I felt it was a good time to cover holiday projects from indie creators. I began with Flesh Eating Cheerleaders: Holiday Special because this was a Kickstarter campaign that I backed.

On the whole, nothing says indie comics like a small press publisher getting their books out to us via Kickstarter. Then again nothing says indie comics more than flesh eating cheerleaders that have an ulterior motive for having Santa’s undivided attention. With the adult nature of this story, Mr. Mascia threads the needle between gratuitous nudity and vital to the story’s plot. It’s not gratuitous if it’s vital to the girls’ plan.

Deon’s artwork on the cover and interior pages is terrific. It’s vivid without being too graphic. I was especially fond of the contents of Santa’s sack. This is a Christmas no one will ever forget!

Flesh Eating Cheerleaders: Holiday Special reads at a very fast pace. When you consider the objective of the story, it makes sense. There isn’t much in the way of dialogue in one. The few balloons we have text in are short and to the point.

As a geek on a budget I would strongly recommend Flesh Eating Cheerleaders: Holiday Special to anyone that’s up to speed on the series. Otherwise there’s a possibility some confusion may ensue.