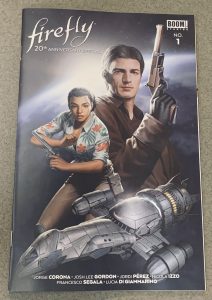 Book Description: The 20th Anniversary Special of “Firefly” gives us two short stories. The first story is an adventure with the original crew. They have come across a wreckage that the Alliance is very interested in. Within seconds of seeing the wreckage Shepherd Book is telling the entire crew to stay away. What could possibly have the shepherd so frightened? The second story is an adventure with Serenity’s new crew. It’s been twenty years since the events of “Serenity”. Zoe and Wash’s daughter, Emma, is now captain. In this story she learns about some of the other powers in the ‘verse when the crew docks for a visit with Lu’s family.

I was late to the party when “Firefly” aired on network television. I didn’t see a single episode until I bought the boxed season set well after the show had been canceled. After two episodes I was chanting, “You can’t take the sky from me!” I loved the writing and chemistry of the characters.

Jorge Corona brings that magic back with the 20th Anniversary Special of “Firefly”. Jayne is still Jayne, leaving the crew wondering how much they truly need him. River continues to be eccentric. What pleased me most about this story was learning so much more about Shepherd Book’s past. The revelation we get is nothing short of inconceivable.

While I have read stories that focus on Serenity’s new crew, I can’t say that I’m very familiar with many of the characters. Mr. Gordon tells a good story. It just doesn’t resonate with me. To me it is akin to Julianne Moore replacing Jodie Foster in the role of Clarice Starling. It’s still good; but not quite the same.

I loved this cover. Having characters from both generations with Serenity brings the franchise together nicely. The detail on our favorite firefly makes it shiny! The coloring, especially going with a matte finish instead of gloss, brings Mail and Emma to life.

The artwork on the interior pages was solid. I was especially fond of the panels of Shepherd Book inside of the ship. His portrayal let us see how things would have been if he had not seen the path he was on.

As a geek on a budget I believe this issue is a must read for fans of the “Firefly” franchise. We get some vital information about Shepherd Book as well as another opportunity to become more familiar with Emma, Lu, and the rest of the new crew.