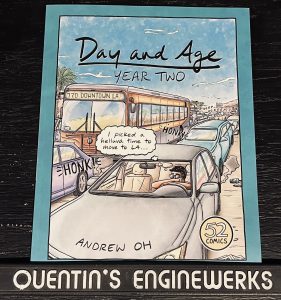 Book Description: With the pandemic 2020 was a crazy year. Andrew Oh captured the highs and lows of the year in an autobiography styled comic book entitled “Day and Age”. This book talked about the keynites of the times: social distancing, masks, and passing time during quarantine. Andrew Oh has given us “Day and Age, Year Two”. In this installment we get a glimpse of awkward moments with a doctor as he deals with a medical condition. We see him adjusting to life living in Los Angeles. We also get to see him in the dating and party scenes.

Reader’s Notes:
From time to time creators will send me books to review. My wife refers to it as “fan mail”. The first volume of “Day and Age” was among the first I ever received. Mr. Oh’s perspective on some aspects of the pandemic were spot on. I believe we all had moments during that period of sheltering in place that pushed us to our limits.

I was very excited to see “Day and Age, Year Two” when it arrived. Would we get more anecdotes about one of the roughest years our country has faced in quite some time? Yes and no.

“Day and Age, Year Two” has friendly reminders of 2020, like bumping elbows instead of shaking hands. Moreover it’s a piece on life as we know it in America. Mr. Oh forgoes all sense of modesty while discussing a medical issue.

During this portion he hits the nail squarely on the head. If you have medical insurance, why do you have to be “in network”? Because of a technicality, he was fortunate enough to be hit for a $100 copay instead of a $5,000 bill that lists the same expenses multiple times in the itemized portion of the bill.

“It’s been more than a year since I’ve had physical contact with another human being and in half a day, four people touched my balls!”

Mr. Oh’s bluntness and candor give the reader some great laughs along the way. I feel his pain. The fear of getting an erection during a medical examination is a real thing. I had a female doctor perform my vasectomy. I’d be lying if I said she wasn’t very attractive. It’s awkward trying not to think about that as they have a scalpel in one hand and your genitalia in the other.

Relocating across the country, figuring out the lay of the land, and dipping a toe in the dating waters always has at least one good story to go with it. Mr. Oh’s adventures don’t disappoint on that front. They range from a bit of an inconvenience to “Dude, that really sucks”. Mr. Oh can take solace in the fact that there are very few men in this country that have not done something stupid in the name of trying to get lucky.

Mr. Oh’s artwork on the cover and interior pages doesn’t necessarily blow one’s hair back. With how well it meshes with the story it doesn’t need to. MOST things are clear and easily identifiable. The stuff that isn’t that vivid…. There’s a reason. I’m okay with that.

Year Two of “Day and Age” reminds me of the comic book strip, “For Better or For Worse”, by Lynn Johnston. It has an honest take on real life events experienced through the eyes of a man in his mid-twenties. Some of the strips are hilarious. Some strips make one question our hero’s ability to make good decisions. That’s exactly what life is.  That is why this geek on a budget highly recommends”Day and Age, Year Two”.