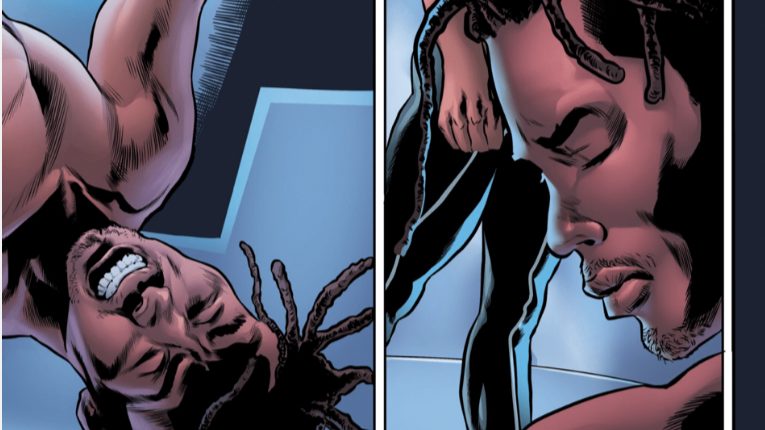 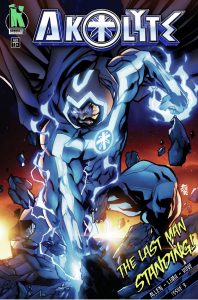 Book Description: In Akolyte #2 we saw that all of the training Demetri Price had gone through had paid off. Like Superman is responsible for the citizens of Metropolis, Akolyte has become the caretaker of Sapphire City. He’s taken on petty thieves and mobsters alike, much to the dismay of Mr. Blok. In the third installment of Akolyte, our hero is taking on a much bigger challenge. Vortex, Brimstone, and Metalhead, The Children of Chaos, have come to Earth in search of the Key of Kah. It is the gateway to the realm of relics. Think of the ancient Egyptian statues of Anubis. This creature possessed godlike powers and special abilities that are believed to be tied to the Key of Kah. Whoever controls the key has the ability to control worlds. Needless to say this is not an item Akolyte wants the Children of Chaos to get their hands on. He takes on Vortex, Brimstone, and Metalhead in a winner take all throw down. Sapphire City will never be the same when it’s over.

Akolyte is a title that has grown on me. I reviewed the first issue in early 2020. At the time I liked the premise but I felt it needed more. Lonzo Starr and company saw that as the gauntlet being thrown down. They have answered with vigor.

While I loved Star Wars: The Empire Strikes Back as much as the next guy, the Jedi training on Dagobah always seemed monotonous. In Akolyte we get a flashback page here and there showing the valuable lessons learned in the years of training… Without tying up a third of the story. I prefer this method.

That’s right. Up to this point Akolyte #3 is better than Empire Strikes Back. If the title can compete with Darth Vader’s reveal at the end of the movie remains to be seen.

My only disappointment with this issue was that we didn’t see Mr. Blok. He reminds me of Kingpin and I would have liked to see how he reacted to the events that were unfolding.

The superhero landing on the cover is cool. It’s detailed and does a great job of showing how powerful Akolyte is. It’s not quite the elevator pitch I look for in a cover though. I’d suggest having more of a variety of colors to help catch the eye of shoppers.

I really liked the interior artwork. There is a lot of detail; but not to the point where it’s a distraction. The panels where the military is planning a surprise party are definitely my favorite.

I liked the style of lettering in Akolyte #3. I think it’s great that we get the character’s name in a special font and color in each each as a helpful reminder of who the players are. I also liked how some of the characters have different fonts to differentiate who is speaking.

As a geek on a budget I have to say that Akolyte #3 is worth the price of admission. It has action, a bit of drama, and it helps us see more of how Demetri transitioned into becoming Akolyte.

This issue will be available for purchase on September 24, 2021 at www.Konkretcomics.com. I strongly advise that you mark your calendars!